Built in the early 16th century, from the period when Portuguese explorers first opened up trade routes across the globe and the zenith of the Age of Discovery. The imposing long façade of the Jerónimos Monastery (Mosteiro dos Jerónimos) dominates Belém on the north bank of the Tejo (Tagus) river. Not only does it define an era but an architectural style. Built to celebrate Portugal's dominance over the world's oceans, it today continues to impresses visitors with its grandeur and magnificence.

Wonder at the massive scale of its cloisters, its awe-inspiring ceilings, the pieces of art, and the finely carved motifs found throughout the structure. The monastery is also the final resting place of Kings and Queens. Here too is Vasco da Gama, Portugal's most famous explorer. 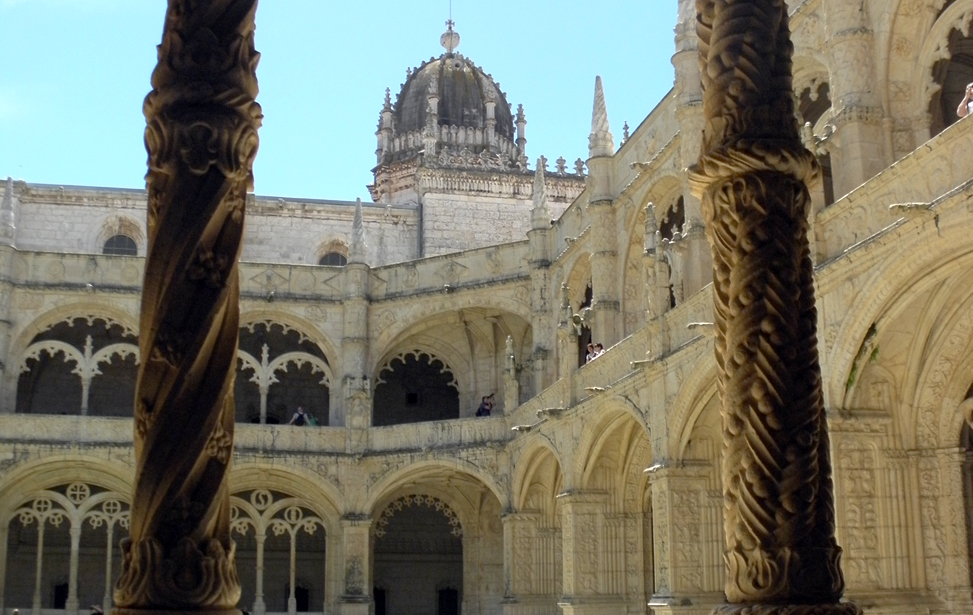 The idea to build a large monastery on the North bank of the Tejo river first manifested in 1496 when King Manuel I requested a pantheon for the Avis-Beja dynasty of which he founded. Construction started in 1501 AD and took a century to complete. The foundations were laid over an earlier church dedicated to Santa Maria de Belém (Belém is the Portuguese word for Bethlehem). It was home to the monks of the Order of Christ, who provided spiritual guidance to seafarers as they set off on their worldly adventures.

The King poured massive resources into the project. It was financed with proceeds gained in part from the "pepper tax", a 5% levy on income from trade with Africa and the Far East, or the equivalent of 70 kg of gold per annum. The limestone used in the construction was quarried locally from Ajuda, Rio Seco, Alcântara, Laveiras and Tercena. Stone has been hewn out of Lisbon's strata ever since the Neolithic period. Lisbon city bears the scars of over 300 inactive quarries.

The ambitious and grand design of the building demanded the attention of successive master architects, such as Diogo de Boitaca (ca. 1460-1528), João de Castilho (ca. 1475-1552), Diogo de Torralva (ca. 1500-1566) and Jerónimo de Ruão (1530-1601). In turn, they all left their influences on this mighty edifice. The architectural styles incorporate Gothic, Mudéjar and Renaissance influences. Found all over the structure are Christian, nautical and naturalist iconographic motifs. This resulting blend of styles later became known as Manueline, named after the reigning King. This decorative style is characterised by virtuoso complex ornamentation in portals, windows, columns and arcades, all of which can be found at the Jerónimos Monastery.

King Manuel I chose the Order of St. Jerome (Hieronymites) as the custodians of the monastery. Their primary role was to pray for the soul of the monarch and provide spiritual guidance to the sailors and navigators who departed from Belém. Here the monks remained until the dissolution of the monasteries in Portugal in 1834.

A new gate was added in c.1625 AD during the reign of Philip II of Portugal (Philip III of Spain). He also oversaw the construction of the Cloister gate, the gatehouse, the monastery staircase and the room that provided access to the upper cloister gallery, which were all designed by the royal architect Teodósio de Frias. In 1640 the abbot Friar Bento de Siqueira commissioned the Monastery's Library. Its collection included books bequeathed by King Manuel's son, the Infante Luís. After the Portuguese Restoration War in 1668 and Portugal's monarchy was grappled back from Spain, the Jerónimos Monastery regained its prestige as a royal pantheon. Four of João IV's eight children we entombed inside, including Catarina de Bragança [wife of the English King Charles II].

Although the monastery mostly survived the great earthquake of 1755, the central part of the upper choir collapsed. Since then, there have been successive restorations over the centuries. The last one was at the turn of the millennium when the cloisters received a spruce up. 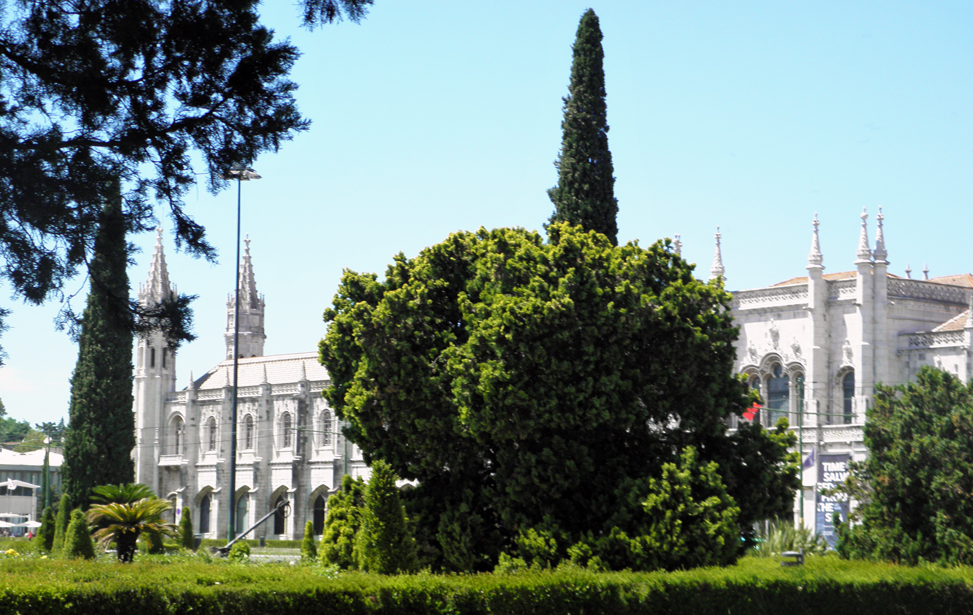 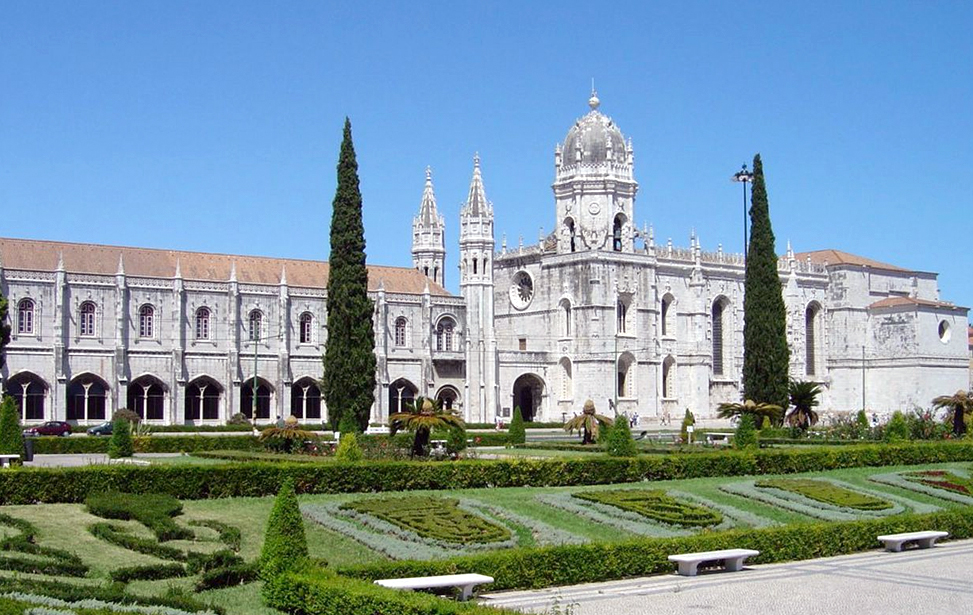 With this entrance ticket you can gain entry to the Jerónimos Monastery at your leisure. Book with confidence with FREE CANCELLATION Buy online before you arrive to avoid queues and have the convenience of the e-ticket on your phone…

• The price includes a single entrance to the venue. Tiqets covers the cost of payment processing and provides you with customer service seven days a week.

• It is strictly forbidden to eat and smoke inside the monastery 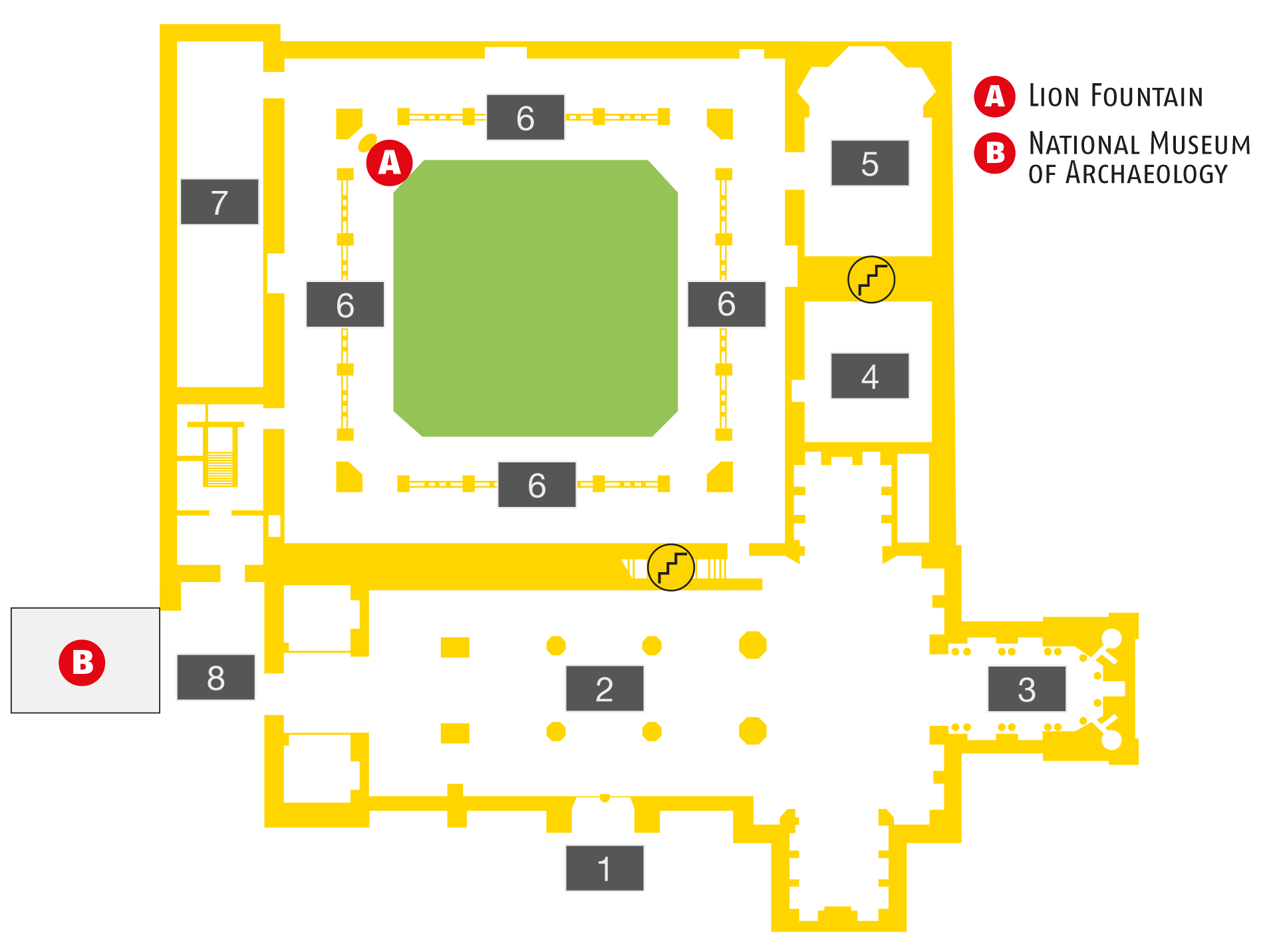 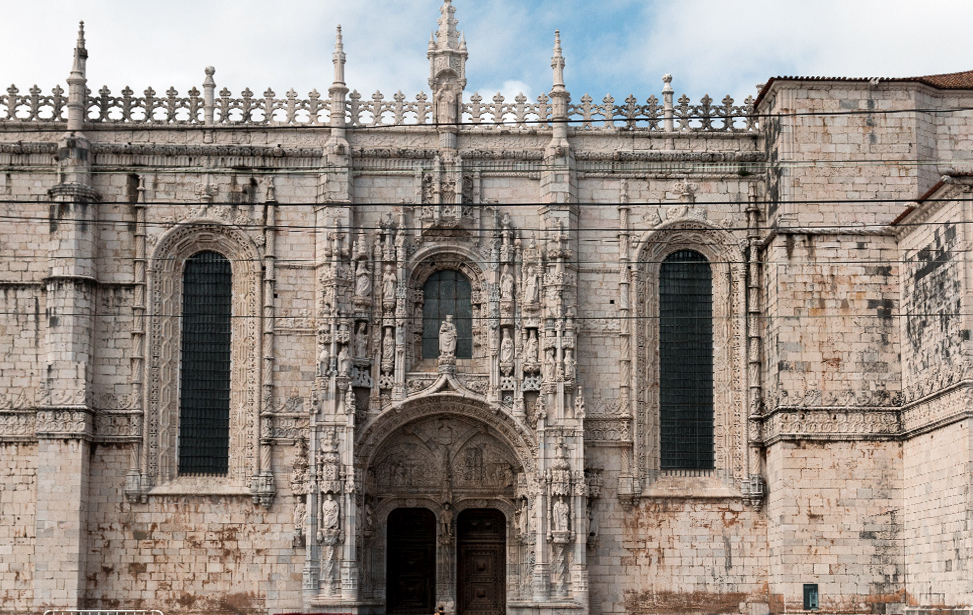 Built between 1516 – 1518 and designed by Juan de Castillo, the prestigious Castilian architect, the South Portal is a remarkable piece of Manueline architecture. Although its practical use is nothing more than a side door, this 32-metre portal is the centrepiece to the monastery's south façade. The intricate filigree detail interwoven into the carving is extraordinary. The central figure standing above the apex of the doorway is Our Lady of Bethlehem (Belém) with the Christ Child. In her hand, she's holding a cup that contains the gifts from the three wise men. Forty or so statues representing the prophets, church notables and saints flank both sides of her.

Within the tympanum, there are two scenes from the life of St. Jerome. In one, he's removing a thorn from a lions paw, whilst in the other, he's paying penance in the desert. Manuel I's royal coat of arms is emblazoned in-between the two scenes. The figure on the central pillar between the doors is the infamous Henry the Navigator wearing armour. Ready to bite the toes of the unweary, two decapitated lions heads sit at the base of the pillar. Standing sentinel atop this cacophony of stone is a statue representing the Archangel Michael. 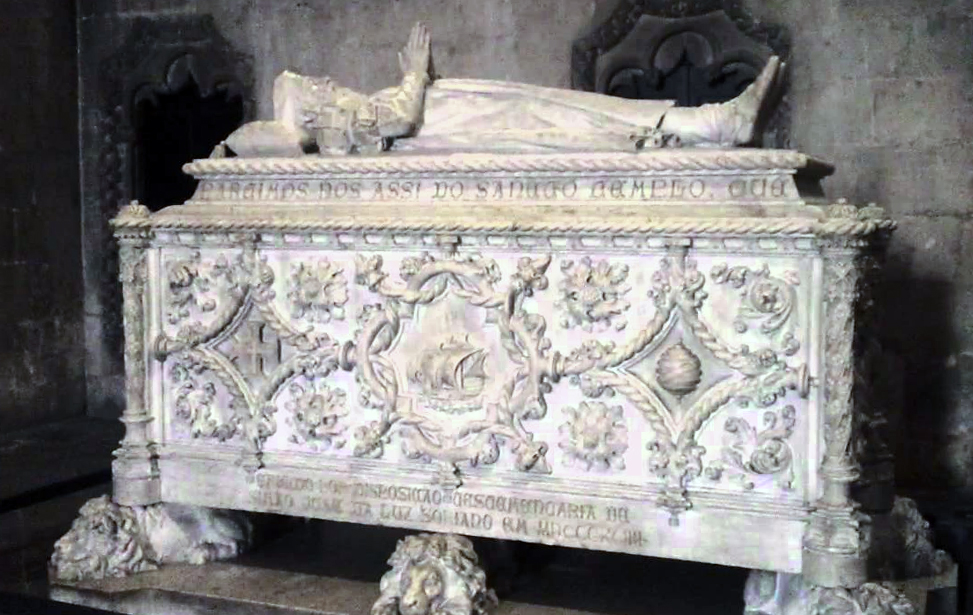 As you enter through the western portal, you'll encounter the tombs of Vasco da Gama on the left and Luís de Camões on the right. The church's footprint represents a Latin cross with three naves and two chapels within the transepts. The chapels were originally designed to house tombs. The 30 metre-wide nave has impressive retaining walls and a unique single-span ribbed vault, a combination of stellar vaulting and tracery vaults supported by six pillars with circular bases. The ceiling itself is a masterpiece of late Gothic architecture and is attributed to Juan de Castilho.

Within the left arm of the transept, the remains of the Cardinal King Dom Henrique and other children of Manuel I are at rest. In the right arm is the empty tomb of King Sebastião and the descendants of King João III. Sebastião fell in the battle of Alcácer-Quibir in 1578 and never returned from North Africa. 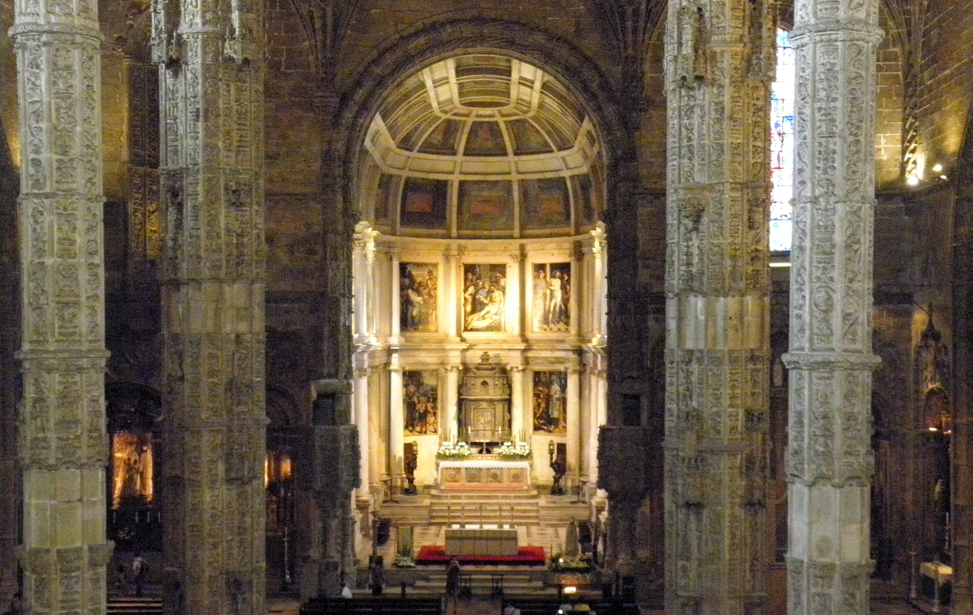 In front of the two transepts is the chancel. It was commissioned in 1571 by Queen Catherine of Austria. It was to be the final resting places for King Manuel I, his wife Maria of Aragon, their son, King Joao III, and his wife, Queen Catherine herself. It was designed by Jeronimo de Ruao and constructed in the classical style. Each tomb is supported by two grey elephants with ivory tusks and topped by 32 Corinthian pillars arranged in pairs and forming a semi-circle. The material used is the famed marble from the Borba and Estremoz quarries in the Alentejo.

The retable behind the high altar contains paintings depicting scenes from the Passion of Christ and the Adoration of the Magi by the Spanish artist Lourenço de Salzedo (1572-1574). A later addition to the chancel is an intricately decorated silver tabernacle gifted to the monastery by Afonso VI after the victory in the war of restoration at the Battle of Montes Claros in 1665. It's the work of the Portuguese goldsmith João de Sousa (1674-1678) and is a magnificent example of 17th-century Portuguese smithery. 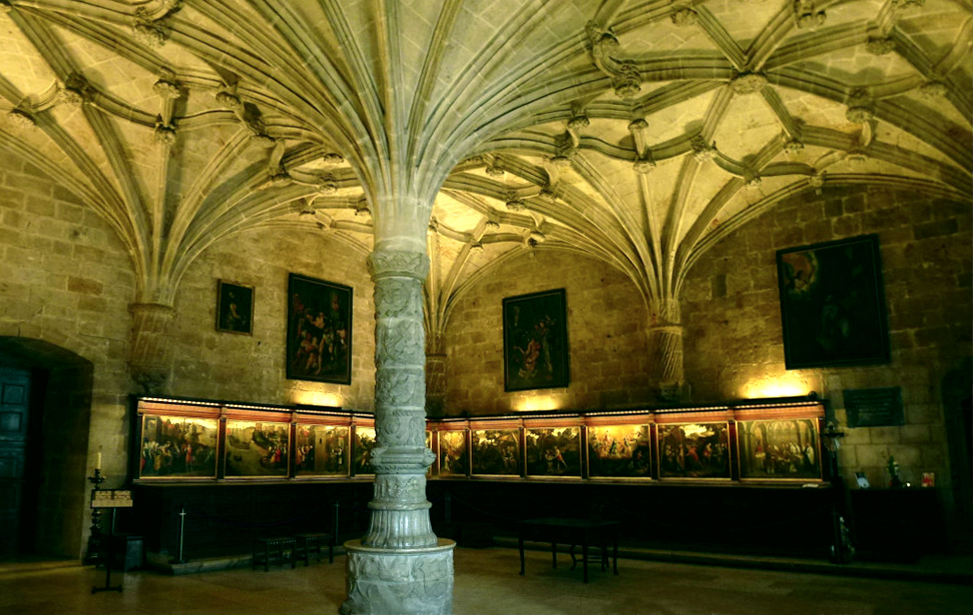 Built in the early 16th Century under the supervision of the architect João de Castilho. The Sacristy is a capacious chamber in which a vaulted ceiling emanates from a single ornate central pillar. A dark wood sacristy chest mounted on ionic pilasters lines three of the walls. The walls are faced by wood panelling and are surmounted inlaid with 14 oil paintings depicting the life of St. Jerome. Designed by Jerónimo de Ruão in the 1590s, it's considered to be the finest example of 16th-century Portuguese furniture making and it is still in use today. 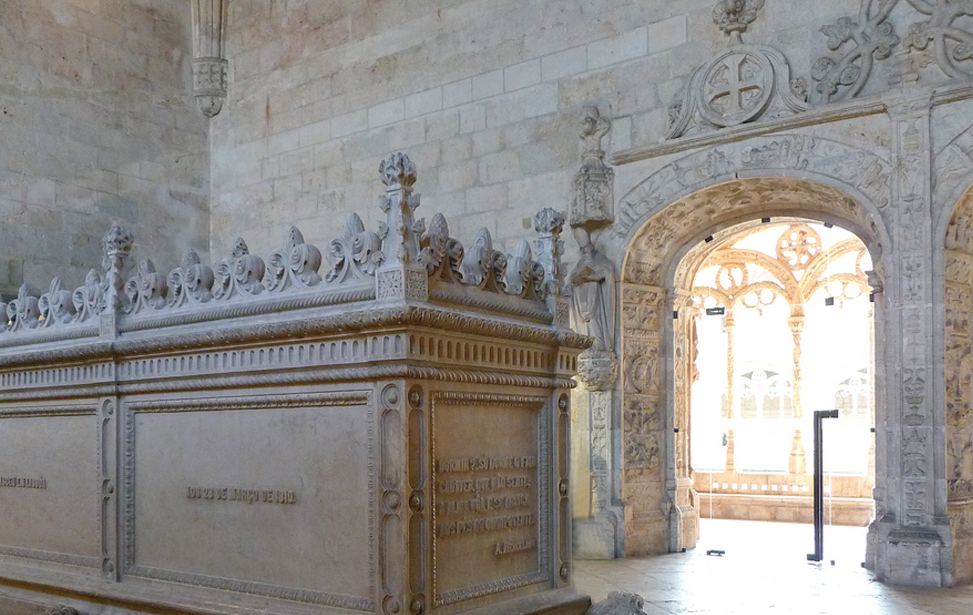 Chapter Rooms (Chapter Houses) are so-called because of the meetings that took place here by monks. The assembly started with a reading of a chapter from the Book of Rules. However, it seems this room was rarely used for this purpose. Although the doorway was completed in 1517-18, inside the vaulted ceiling and interior decoration were only completed in the 19th century. Instead, the room is used for the resting place of liberal poet Alexandre Herculano whose tomb lays in the centre of the room. The Chapter Room was also used as the final resting place for other writers and Portuguese Presidents until completion of The National Pantheon. 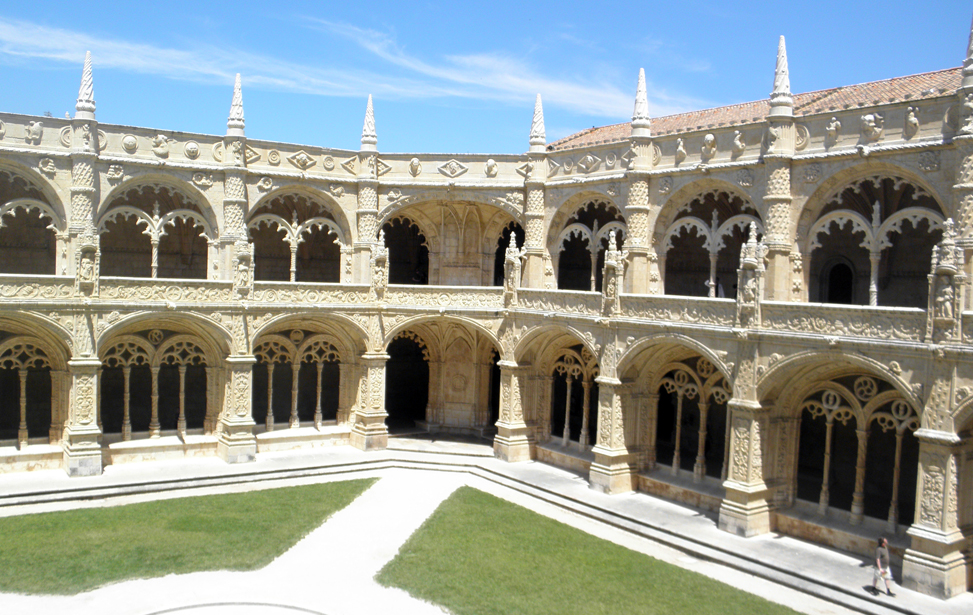 Although designed not to be impressive but to offer a tranquil space for meditating monks of the Hieronymite Order, these cloisters still pack a massive wow factor. Work commenced in the early 16th century and overseen by the architect Diogo de Boitaca. Work continued later on by João de Castilho from 1517 onward until being completed by Diogo de Torralva in 1540-1541. Spread over two storeys, the resulting work is one of the first if not the finest examples of Manueline architecture found anywhere. The stonework is incredibly ornate with religious symbols, royal imagery, the Cross of the Order of Christ, the armillary sphere, the royal coat of arms, twisted ropes and plant-inspired motifs that live alongside mythical creatures. 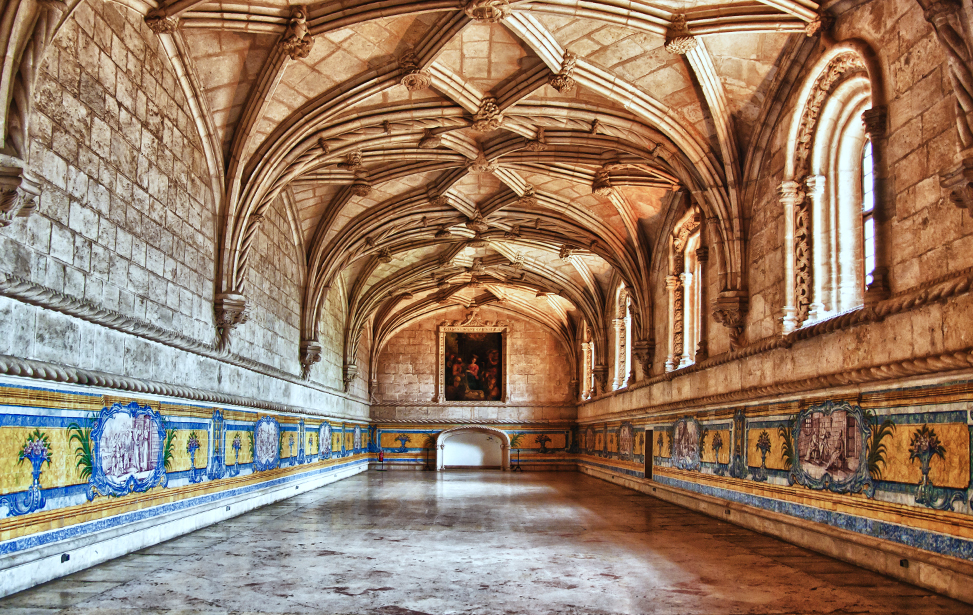 Built in 1517/18 by Leonardo Vaz, the Refectory has an impressive multi-ribbed low vaulted ceiling as was en vogue at the time. The azulejo tiles that adorn the walls date from a later time, from the early 17th century. They depict Jesus feeding the 5000 (Matthew 14:13-21) on the north side and the life of Joseph in Egypt from the Old Testament on the opposite wall. Here, there was a small wooden pulpit where extracts from the Holy Scripture were read during meal times. At the southern wall, above the heating chimney, is an oil mural, "Adoration of the Shepherds", by António Campelo from the late 16th century. It was restored in 1992. On the north side is a 17th-century painting of St. Jerome by the court painter Avelar Rebelo. 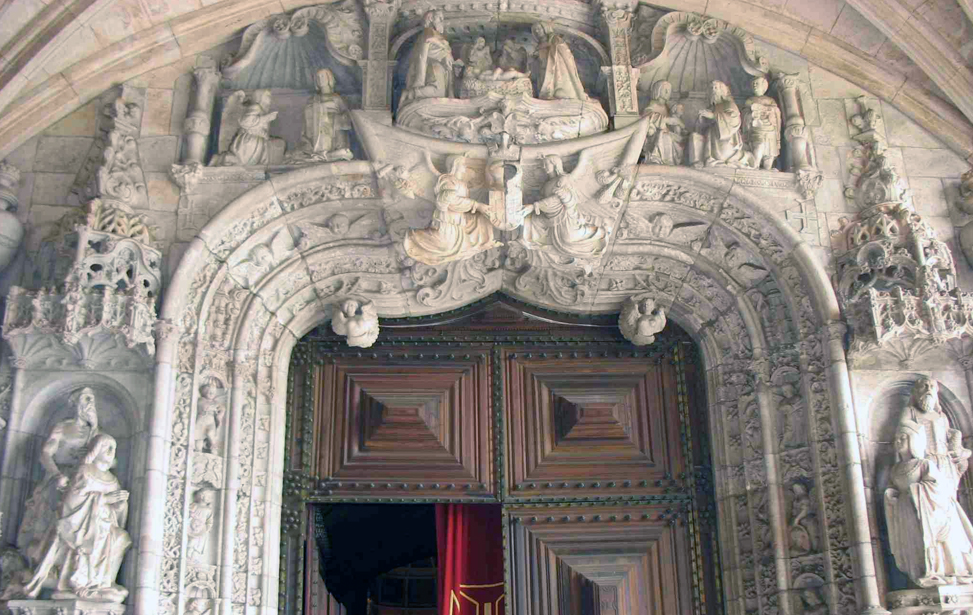 Although this portal serves as the main entrance to the complex it's less grand than the South Portal yet it's worth your scrutiny as you wait to enter. In accordance with Christian tradition, this doorway faces east and is in line with the High Altar. It was designed by Diogo de Boitaca and carved by Nicolau Chanterenne in 1517. Three niches sit atop the doorframe in which statues representing scenes from the nativity can be found. Left and right of the portal are statues of the Monastery's founding monarchs in prayer, with their respective insignia and patron saints: on the left Manuel I and behind him, standing, St. Jerome; on the right, Queen Maria, Manuel's second wife and St. John the Baptist.

Found on the lower tier of the Cloisters is a fountain in the shape of a lion, the heraldic animal of St. Jerome. The arcades are topped by vaulted ceilings and have double arched windows. In the north wing of the lower cloister is the tomb of Fernando Pessoa, created by Lagoa Henriques in 1985. The upper cloister has the twelve niches where navigators once paused for confession before their epic voyages of exploration. The view from the second tier is breathtaking and reveals the limestone quadrangle layout and the grandeur of this structure.

ONLINE TICKET | With this entrance ticket you can gain entry to the Jerónimos Monastery at your leisure. Buy online before you arrive to avoid queues and have the convenience of the e-ticket on your phone…