Since its conception in 2014 the Time Out Market has become a real foodies paradise attracting tourists and locals in equal numbers. This large food hall occupies the vintage Mercado da Ribeira building close to the Cais do Sodre train and metro station. Within the doors, the array of 26 restaurants, eight bars, a dozen shops and a high-end music venue will leave you spoiled for choice and may require multiple visits. 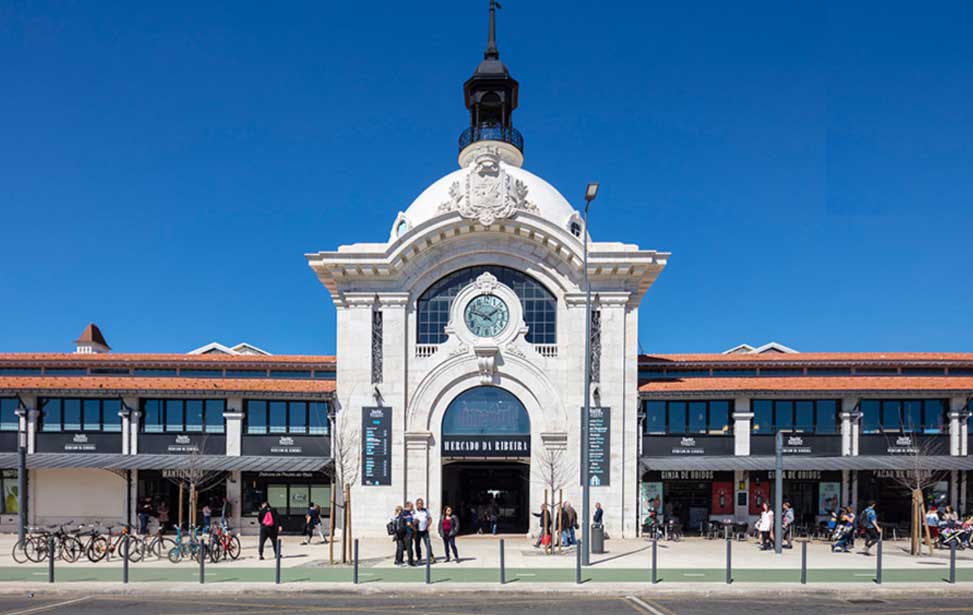 The original incarnation of the Mercado da Ribeira in Cais do Sodré began on New Years Day in 1892 when it was known as the Mercado 24 de Julho. The building continued the tradition of Lisbon's fame for hosting a world-famous market. The wholesale market closed in 2000 and Time Out won the concession to take over the first floor ten years later. Its function as Lisbon's major produce market continues on the ground floor in the mornings. The vendors who sell fresh fish, meat and vegetables are still utilised by top chefs.

The Time Out Market opens at 10am and serves meals until midnight. Since its inception in 2014, it has grown to be one of the liveliest culinary hotspots in Lisbon. The variation of cuisine available is astonishing. Time Out Lisboa is a true showcase for traditional Portuguese dishes and innovative Michelin starred chefs alike. Sweet, savoury or spicey, homegrown or global, meat, fish, vegetarian or vegan – it's all here under one iron-clad roof. Over 40 spaces in the Time Out Lisboa represents all the food categories and tastes that help make Lisbon what it is. Time Out Market is the first market in the world where everything has been chosen, tasted and tested (with four or five stars, and not one star less) by Time Out’s own journalists and critics. If it goes in the magazine, it goes into the market. You can keep tabs on the ever changing list of restaurants, bars and shops at Time Out Market [ here ► ] and plan your visit before you go.

GETTING THERE & THE CAIS DO SODRÉ

The Cais do Sodre has reinvented itself over the years into one of Lisbon's coolest districts full of clubs, bars, restaurants and shops. The quayside, Ribeira das Naus, has great views over the river and the bridge beyond make an ideal spot to take a break, sip a lemonade, cocktail or beer from the kiosk and take in the atmosphere. Cais do Sodré is also a major transport hub making it easily accessible. The ferry port next to the train station runs services to the southern bank of the Tejo to Cacilhas, Montijo and Seixal. Cacilhas is famous for its riverside fish restaurants and where you can catch the bus to the Cristo Rei statue. The railway station connects central Lisbon to the beaches at Cascais, Estoril and Oeiras, passing Belém along the way. There's a metro station here too, the southern terminus of the green line. Regular trams and buses also stop here.