The Palácio Nacional de Belém is the official residence of Portugal's Presidents and was homes to the Portuguese Royal family from 1723 right up to the end of the monarchy in 1910. The palace is distinctively pink and one of the grandest buildings in Belém. Guards in traditional uniform stand to attention in their sentry boxes at the main gate. As a working state-building, access to the public is regulated. There are five guided tours each Saturdays. However, there is a museum adjoining the palace which has full-time opening hours. A Changing of the Guard ceremony is held at eleven o’clock on the third Sunday of each month, performed by the Belém National Palace guard of honour. The presence of the president is announced by the hoisting of the presidential flag on the palaces main façade. 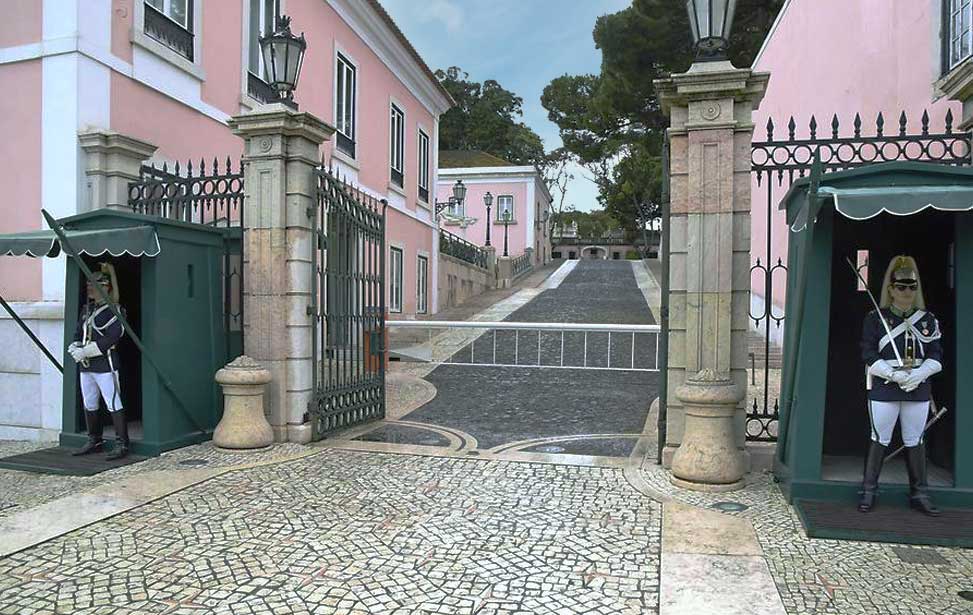 Sentries at the gates of the Belém Palace

Classified as a national monument in 2007, Belém Palace became the seat of the presidency of the Portuguese Republic following the election of Portugal's first President, Manuel de Arriaga in 1910, bringing an end to 500 years of history. Used as a summer residence, and sometimes as the main residence, Quinta de Belém, as it was known then, was home to successive generations of Kings and Queens. The central core of the palace was constructed in 1559 by Dom Manuel de Portugal, an icon of the Portuguese Renaissance, on land rented from Hieronymite monks. The site is situated on a small hill overlooking the Rio Tejo riverside. The river's edge has since moved a few hundred metres South both by the powers of man and of nature. In 1726 Dom Joao V purchased the palace as a summer retreat from the hubbub of central Lisbon. It survived the Great Earthquake of 1755 and served as a field hospital for the injured survivors. Still fearful of aftershocks, the Royal residents camped outside in tents.

As you enter the palace grounds, you'll traverse up a ramp flanked either side by presidential guards with the old stables to the left, which now forms The Museum of the Presidency of the Republic. The ramp terminates on the Patio dos Bichos so-called because within the walls of this courtyard are cages that once housed wild animals from Africa. It is here too you'll find the entrance into the main building of the palace.

Once inside ascending the stone staircase, past the stone portico, one enters the famous Sala das Bicas where the guests of the president give interviews to the media. The floor of this reception hall is made of black and white marble and has an impressive painted wooden ceiling. The walls are adorned with polychromatic azulejo tiles and jasper busts representing Roman emperors. Here also are two drinking fountains which give the room its name. The room is illuminated by an impressive bronze chandelier. Black tapestries emblazoned with the crest of Dom João V complete the rooms decoration.

The room to the right of the Sala das Bicas is the Dining Room which is an addition to the original building. On the walls, there's a painting representing the five senses; sight, hearing, touch, taste and smell. Between 1980 and 1985 the room was used as a museum to display gifts presented to President of the Republic Ramalho Eanes. The room returned to its original function following the end of his presidency. 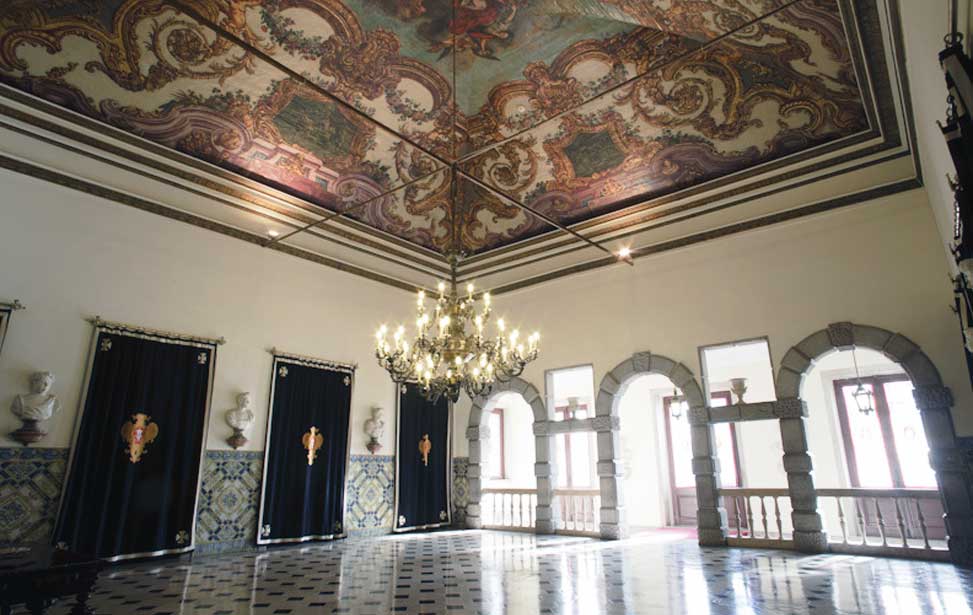 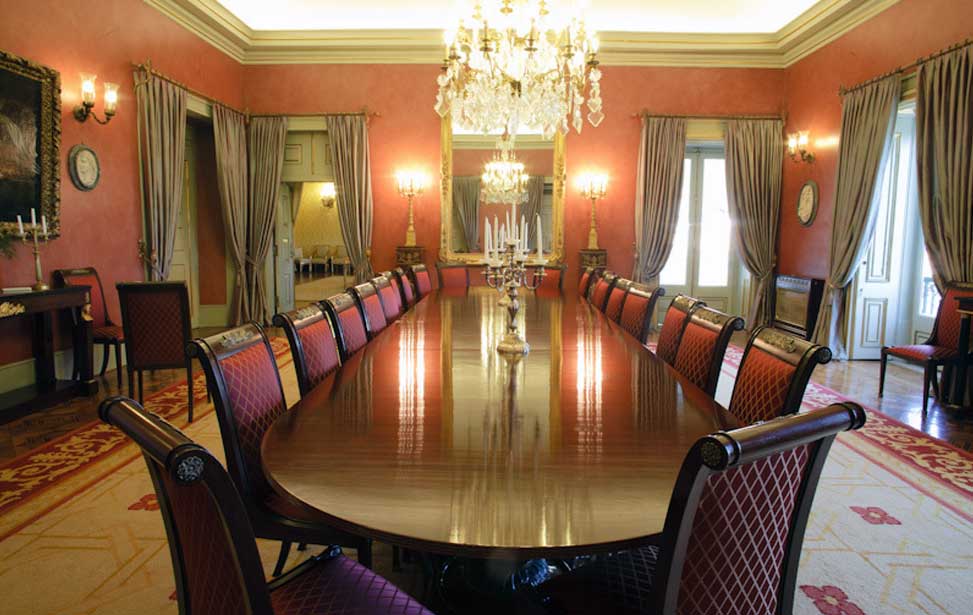 The Sala Dourada or "Golden Room" is one of three reception rooms and retains its original layout from the time of Dom Manuel. The sumptuous ceiling of the Sala Dourada dates from the 18th century. Its sumptuous design is considered one of the finest in Portugal. Consisting of gold-framed panels, a central allegorical painting and four medallions surrounded by a plenitude of gilt carvings. Behind the Sala Dourada, there is a tiny chapel where Dom Manuel II and his brother, Luís Filipe, were baptised. In 2002 the chapel was gifted a set of eight pastel paintings by Paula Rego. They depict the life of the Virgin Mary. The Sala Império or "Empire Room" is so named for its Empire-style furniture was formerly called the portrait room or presidents room because up to 1985 portraits of past presidents hung on its walls. Today a large tapestry takes its place.

The Sala dos Embaixadores (Ambassadors Room), also referred to as the Sala Azul or Blue Room is where newly elected members of the government are sworn in and foreign ambassadors deliver their credentials to the President of the Republic. The room has an impressive panelled ceiling with a large crystal chandelier as its centrepiece. Adding the Sala dos Embaixadores is the presidential cabinet room (Gabinete de Trabalho do Presidente da República). During the Portuguese monarchy, it was the King's bedroom. On the wall, one finds a painting of King Dom Carlos and on adjacent walls hangs paintings by Ricardo Viana depicting Sintra and the Alentejo. Behind the great desk is the president's chair fitting with lion heads on its armrests. The palace was colloquially known as the “lions’ den” in the 18th century; the symbol of both strength and wisdom. Leaving the cabinet room one steps outside and passes through the Patio das Damas or Ladies Patio.
The Parterre style garden of Belém Palace (Jardim de Buxo) overlooks the Praça Afonso de Albuquerque beyond the palace's boundaries. Inside the garden, we find the Casas de Fresco, which date from the 17th century and altered during the reign of Dona Maria I. Their purpose was to provide welcomed shade during hot summer days. The impressive design of the Cascade Garden was constructed on the request of Dona Maria I to accommodate a collection of exotic birds. A large statue of Hercules marks the garden's central axis. The east wing of the palace was once the Royal riding school (Picadeiro Real) and now houses one part of the Coach Museum. 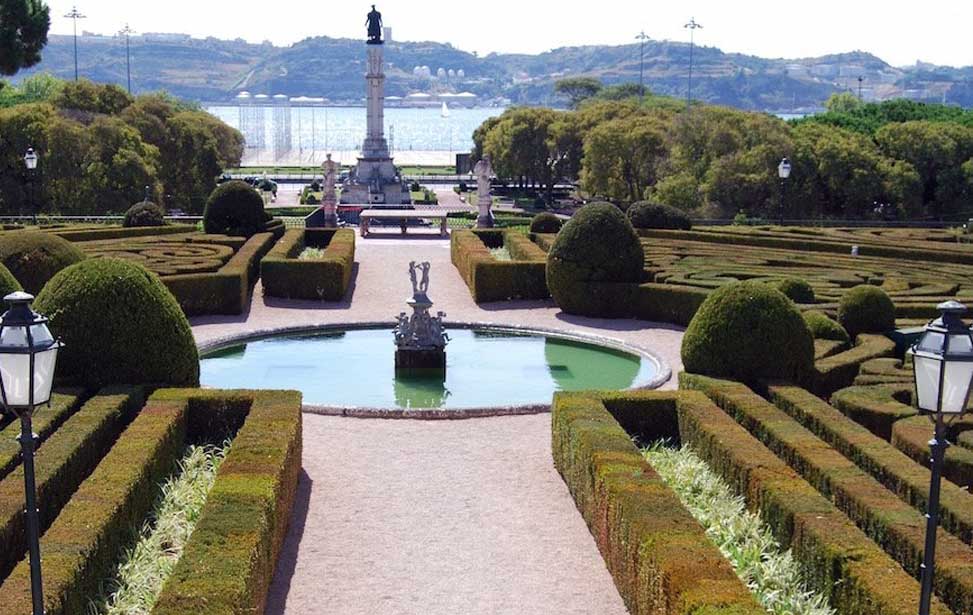 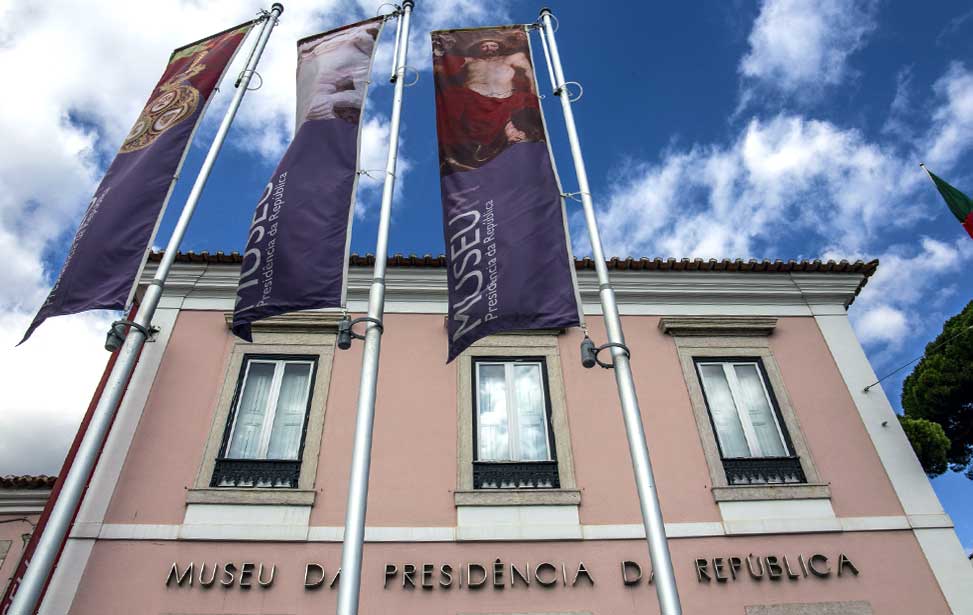 The museum is part of the palace and the most accessible. It can be visited every day except Mondays. Inside are exhibits that tell the story of the Portuguese Republic and its Presidents. Here too, are detailed explanations of the nations Flag and National Anthem, the achievements of Portugal's political leader and the advancement of Portugal over the decades since monarchy.

Getting to the Belém Palace