One of the most stylish of Lisbon's icons is the gazebo-like kiosks. They're located in squares, parks and close to transport hubs all over the city. The original kiosks date back to the 19th century and explain the Art Noveau styling of the oldest cabins. Inspired by the kiosks found in Paris Lisbon's first kiosk opened in Rossio Square in 1869. Their use became popular and kiosks spread rapidly throughout the city. They served wine by the glass, beer and traditional refreshments. Eventually, they also offered snacks, such as fried fish and cod fillets, which fed the dock workers. Later they also began to attract the middle class and the elite, who gathered in the main squares and gardens.

Lisbon's quiosques became obsolete and fell into disrepair during the mid 20th century. The Salazar regime discouraged public gathering and conversation. Today they're enjoying a revival, thanks in part, to Catarina Portas, a Lisboeta, former journalist and entrepreneur who started a campaign to breathe new life into this city icons. Some old wrought iron kiosks were renovated and sit in their original locations. Others are replicas utilising 19th-century designs.

What to order at a Quiosque 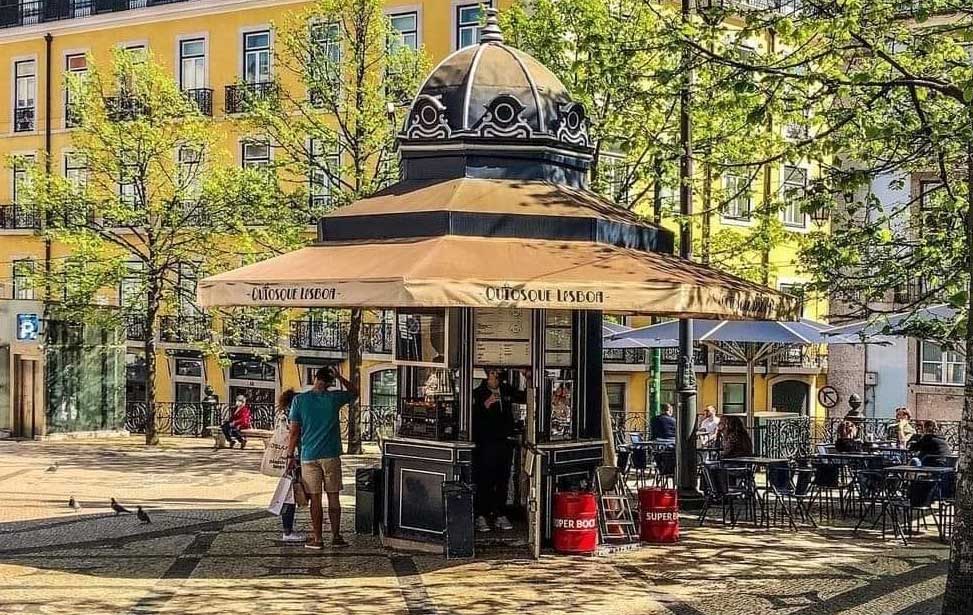 Every kiosk has the staple offerings of coffee, beers, fruit juices, sangria, wine and cocktails. Standard food options are sandwiches, sweet and savoury pastries and maybe pizzas. As well as the resurrection of the kiosks certain old recipes have been revived. Keep an eye out for the following for an authentic Lisboeta experience:
• Capilé: A cordial made from the syrup of maidenhair and orange blossom essence mixed with water.
• Carioca de Limao: A tea/infusion made with lemon peel.
• Empada: A snack sized pies made from chicken or beef
• Ginja/ginjinha: A sour cherry liquor popular within the Lisbon area sometimes served in dark chocolate cups
• Groselha: A red currant refreshment
• Leite Perfumado: Milk flavoured with cinnamon, lemon and sugar
• Licor Beirão: Probably Portugal's most famous aromatic liquor made from a secret blend of herbs best drank with an ice cube.
• Limonada Fresca: Homemade lemonade
• Mazagrã: A cold, sweetened coffee drink originating from North Africa
• Orchata: A soft drink made from almonds, sugar, and water
• Pastel de Nata: Lisbon's world famous custard tart
• Poncha: A sweet punch-like drink from the island of Madeira made from distilled sugar cane and flavoured with fruit juice 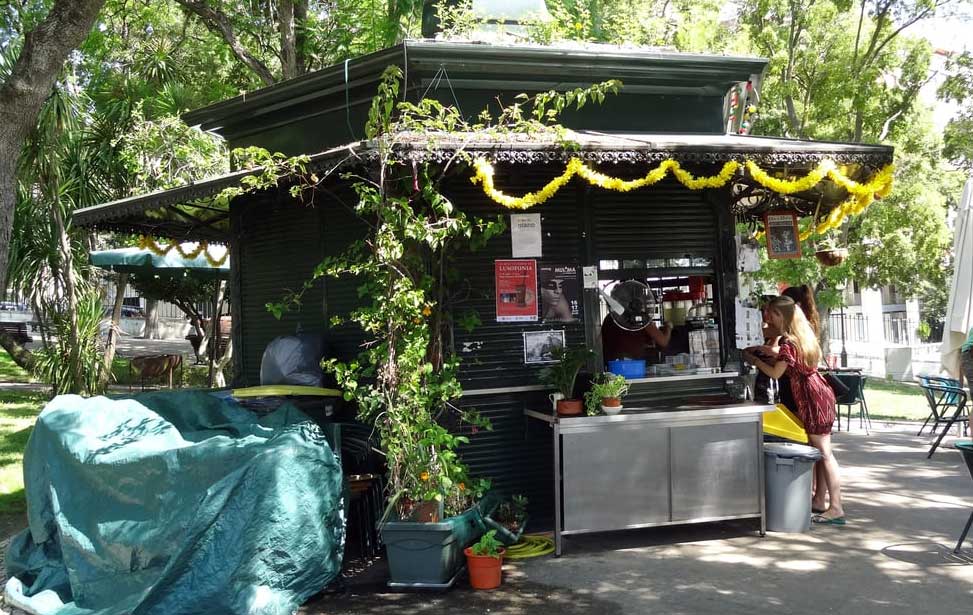 In the heart of the Jardim Botto Machado park, (also known as Campo de Santa Clara), the kiosk Quiosque Clara Clara is situated within a tranquil location. The park is opposite the National Pantheon and a short stroll from Santa Apolónia station. The kiosk is popular with families as the playground keeps the little ones occupied. Quiosque Clara Clara offers a broad range of reasonably priced snacks, pastries and beverages. On Saturdays and Tuesday's the Feira da Ladra flea market is held nearby. 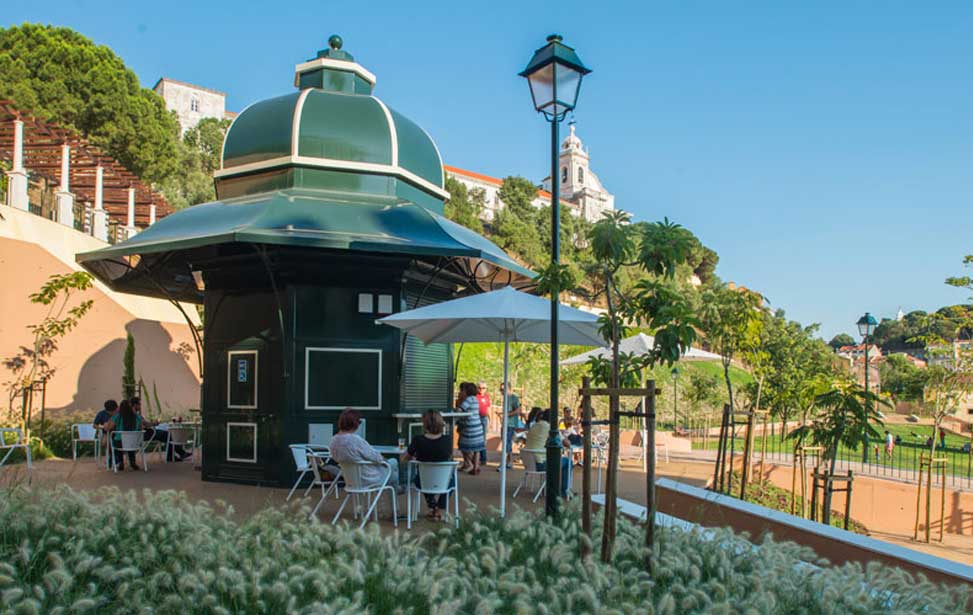 Located between the districts of Graça and Mouraria on a hillside terrace. Offering a great view of the castle and city views below. The garden Jardim da Cerca Graça was created in 2015 as part of a larger scheme to regenerate the area. There areas for a picnic and a playground for the young ones. Since opening the large kiosk here plays an indispensable part of the area. It serves cold soups, sandwiches, toast, beverages and the cake of the day. 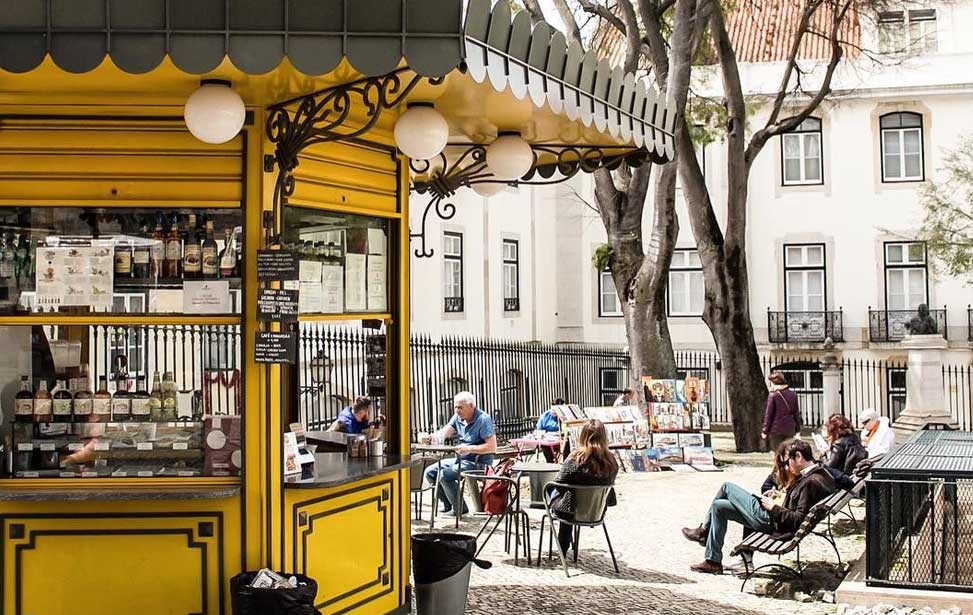 The small square in front of Lisbon's cathedral is in a prime position for a spot of people watching. Here you can enjoy delights ranging from finger foods, toasts, pastries, hot and cold beverages and even a glass of port or ginginha. The ding-ding of Lisbon's old trams accompany your refreshment as they trundle past. Buses stop here and tuk-tuk drivers apply their trade. Considering the vast amount of tourists who use the kiosk, the prices and quality remain excellent value. Space is limited and vacant seats can be hard to come by.
Daily: 08h30 – 22h00
Calçada do Monte 46, 1100-362 Lisboa, Portugal.
38° 42' 34.7" N | 09° 08' 01.0" W
+351 213 958 329 | Website 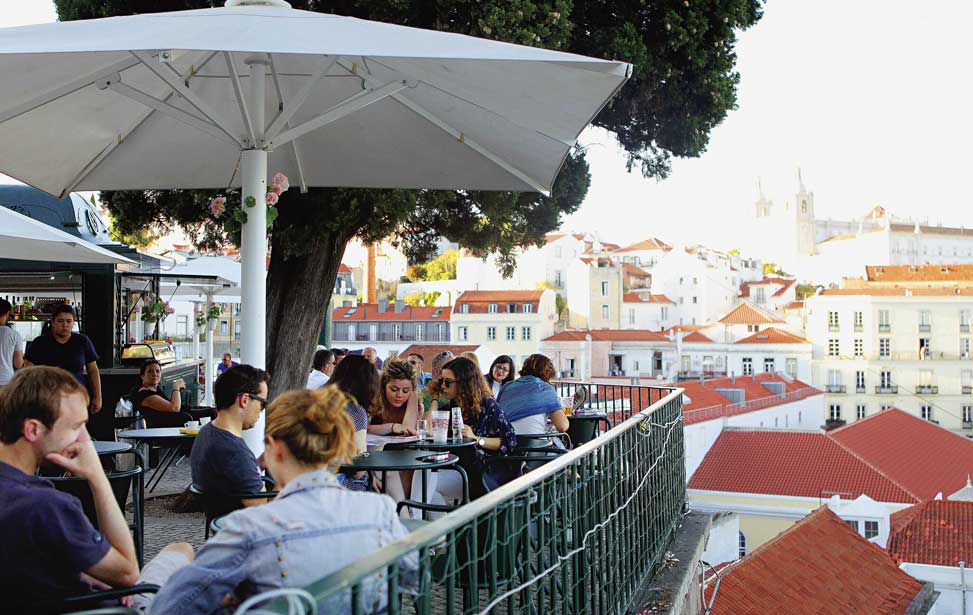 The Miradouro das Portas do Sol viewpoint stands on the summit of a hill lies a feast for the eyes and your camera, overlooking east over the red-tiled houses of the Alfama district below. On the opposite hill, you can see the São Vicente de Fora monastery and the St. Vincent Monastery, from where the landscape cascades down to the river Tejo where berthed cruise ships await. This balcony is overlooked by the statue of Lisbon's patron saint St. Vincent who is clutching a boat and two ravens, the heraldic symbols of the city.

The Quiosque Portas do Sol is probably one of the picturesque kiosks in Lisbon and tends to be very busy throughout the day. They serve a selection of fruit juices, beers, wine, cocktails and coffee, that is freshly brewed. They also offer a range of wraps if you're feeling peckish. | 737 12E, 28E 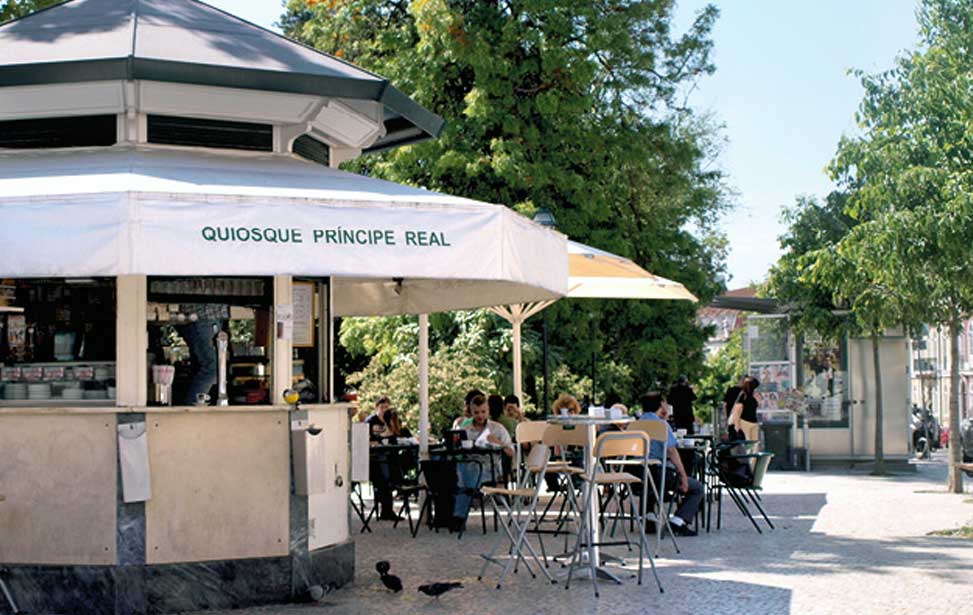 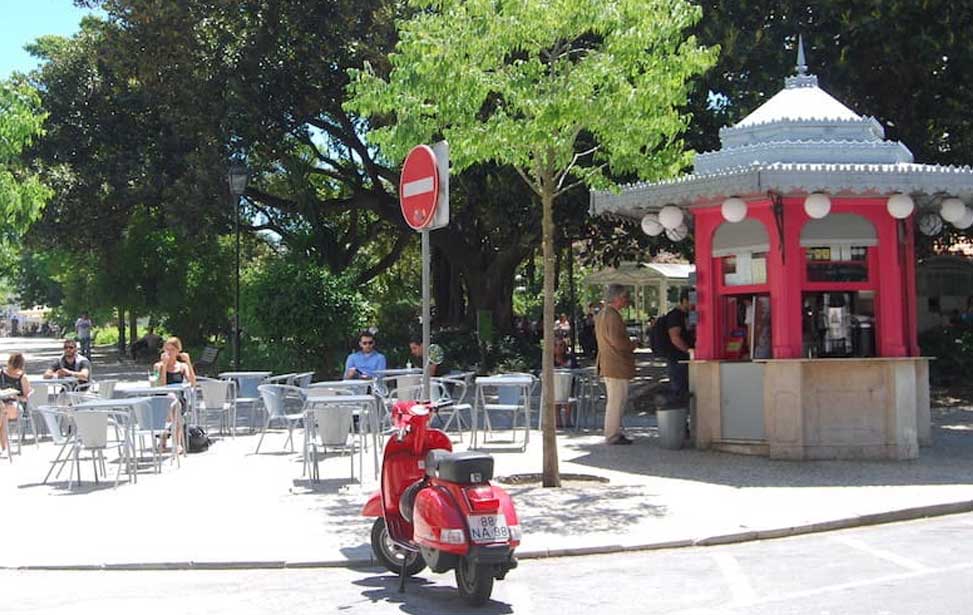 There is a second kiosk located on the opposite corner of the Príncipe Real garden. The kiosk is a great spot to rest after visiting either the farmer's market or the craft market that is held here each week. There is a wide selection of small eats and drinks available on the menu. 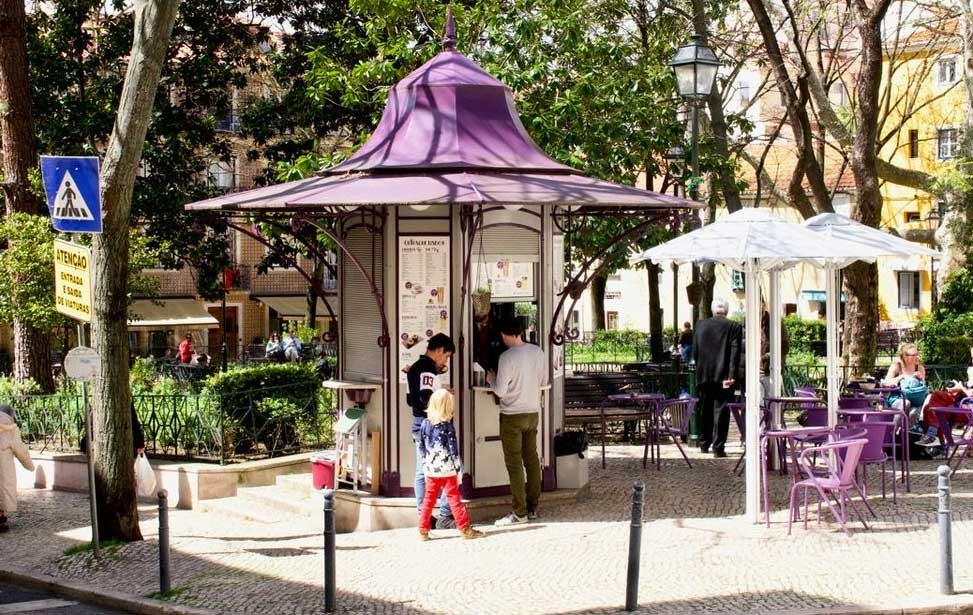 One of Lisbon's smallest kiosks and situated in a quiet spot on the Praça das Flores. The menu contains traditional Lisbon drinks and light meals. 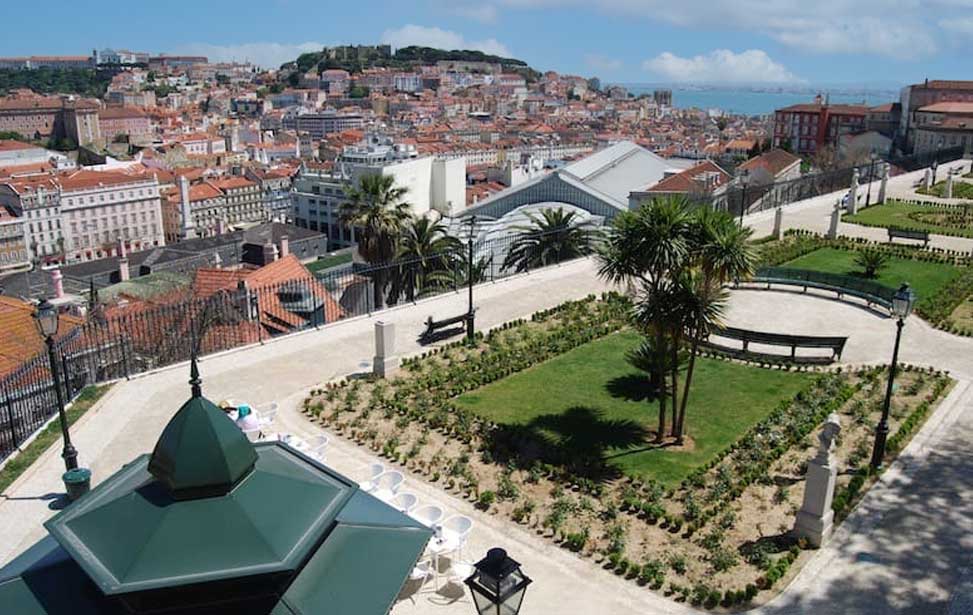 The Miradouro de São Pedro de Alcântara terrace offers one of the best panoramas over Lisbon overlooking the Baixa district. On the opposite hill is the Alfama and Lisbon's castle. Here is a wonderfully manicured garden complete with a water fountain, busts of heroes and gods from antiquity, such as Minerva and Ulysses. The terrace is located close to the top of the Gloria Funicular and is one of the most frequented of Lisbon's viewpoints.

Here too you will find a welcomed little kiosk café, ideal to rest tired feet, enjoy a cold one and take in the breathtaking view. The Miradouro de São Pedro de Alcântara is a great place to start your trip to Lisbon and find your bearings. There is a useful map pinpointing the noteworthy landmarks. When the sun is setting the Miradouro de São Pedro de Alcântara becomes a romantic destination for couples. After dark, especially on weekends, the viewpoint takes on a party atmosphere. | 202, 758, 773, 24E 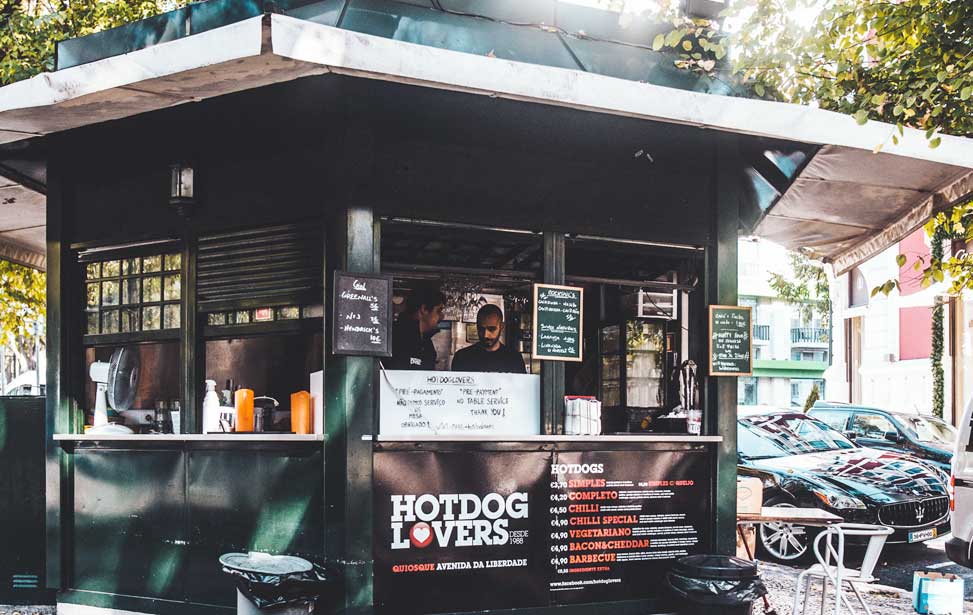 The Hot Dog Lovers company was started in 1986 and on the Avenida da Liberdade since 2010. Their boast of making the best hot dogs in Lisbon is a bold one, yet their artisan dogs are extremely good and worth bragging about. There are seven variations to choose from, including a vegetarian option. There are also other tasty morsels on the menu. The cabins location on the Avenida da Liberdade is ideal and makes a great pitstop if passing by. 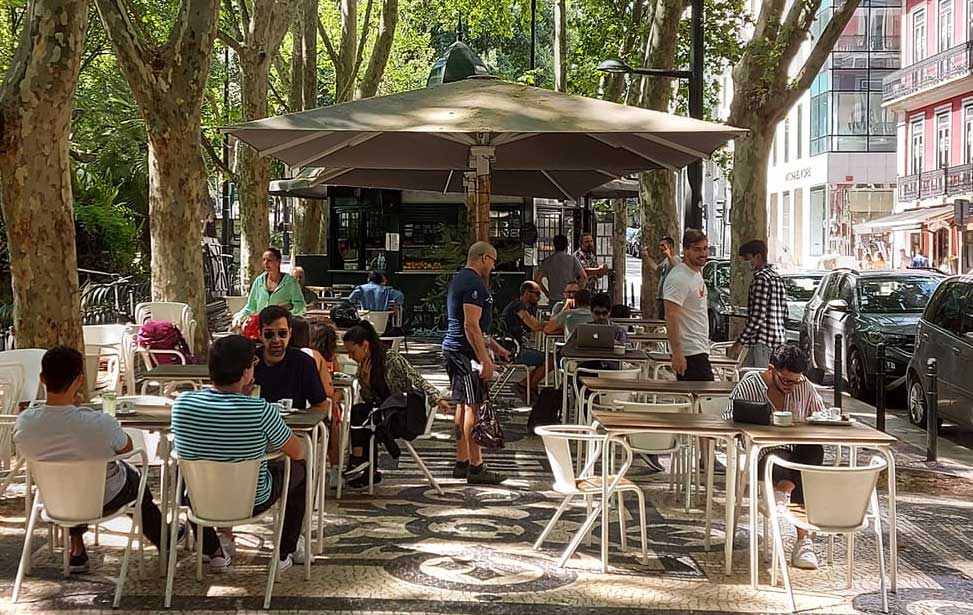 Another great kiosk on the Avenida da Liberdade is the place that claims to serve the best chocolate cake in the world. Their claim might sound ambitious but their signature chocolate cake is scrumptious and is well worth treating yourself. The company were established in 1983 and has a presence on the avenue since 2011. There's also a selection of savoury options such as tortillas, toasted sandwiches and croissants. There's also a full range of hot and cold beverages available too. Important football matches are shown on a TV screen and there are occasional DJ sets during the summer.
Week: 09h00 – 02h00, Weekends: 10h00 – 02h00
Avenida da Liberdade, Lisboa, 1250-145, Portugal.
38° 43' 01.9" N | 09° 08' 34.5" W
+351 919 299 242 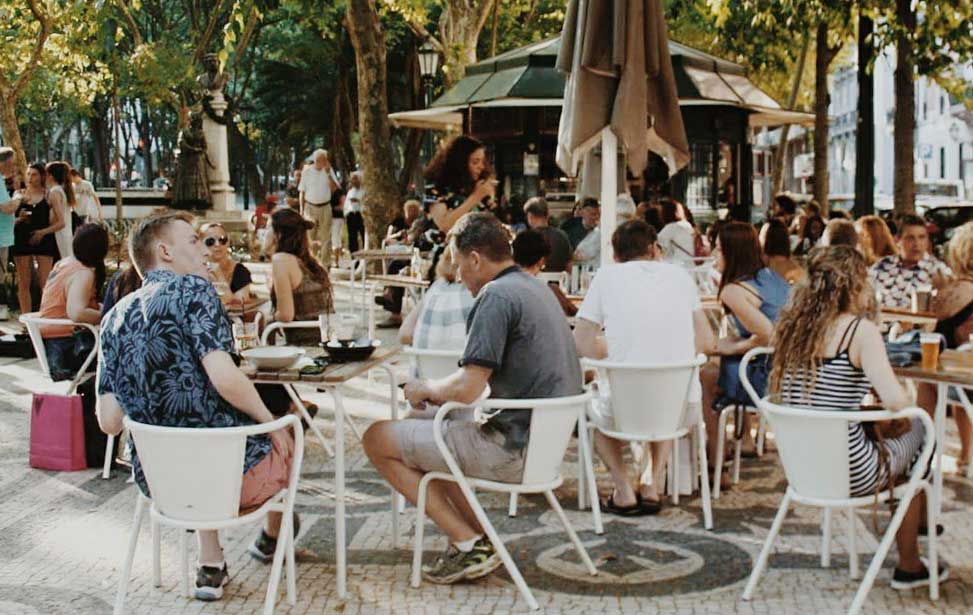 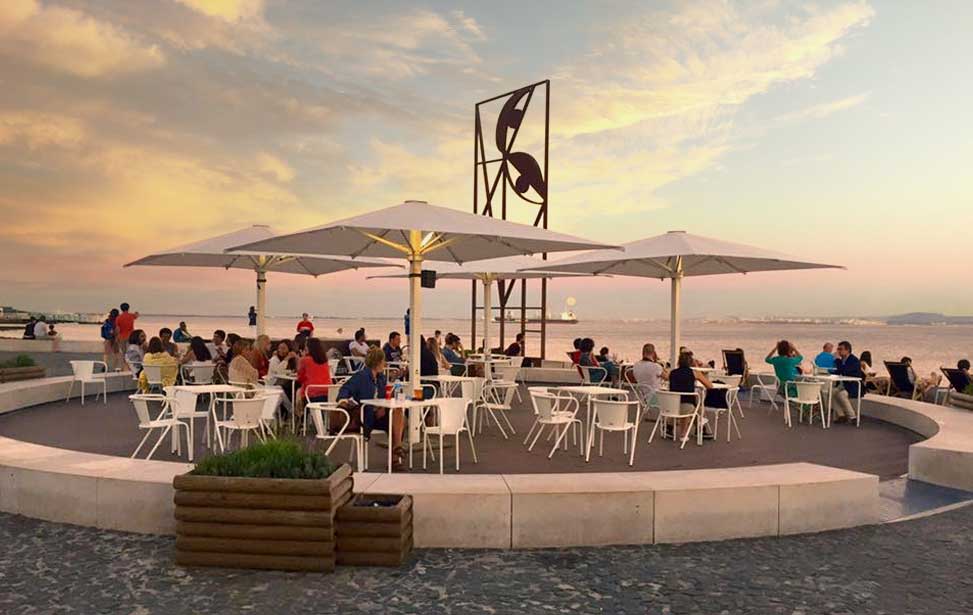 Ribeira das Naus is the quayside area between the Praça do Comércio and the Cais do Sodré train station. The views over the river and the bridge beyond make an ideal spot to take a break, sip a lemonade, cocktail or beer, and take in the atmosphere. No surprises then that this kiosk can get crowded. There's usually a hum of activity and live music during the weekends and evenings. During the day, the terrace is a sun trap and a great spot for sunbathing. During the even, it's a perfect spot to watch the sunset. On the menu, there is a selection of pizzas, sandwiches and sweet pastries. | 201, 202, 758, 782, Cais do Sodré 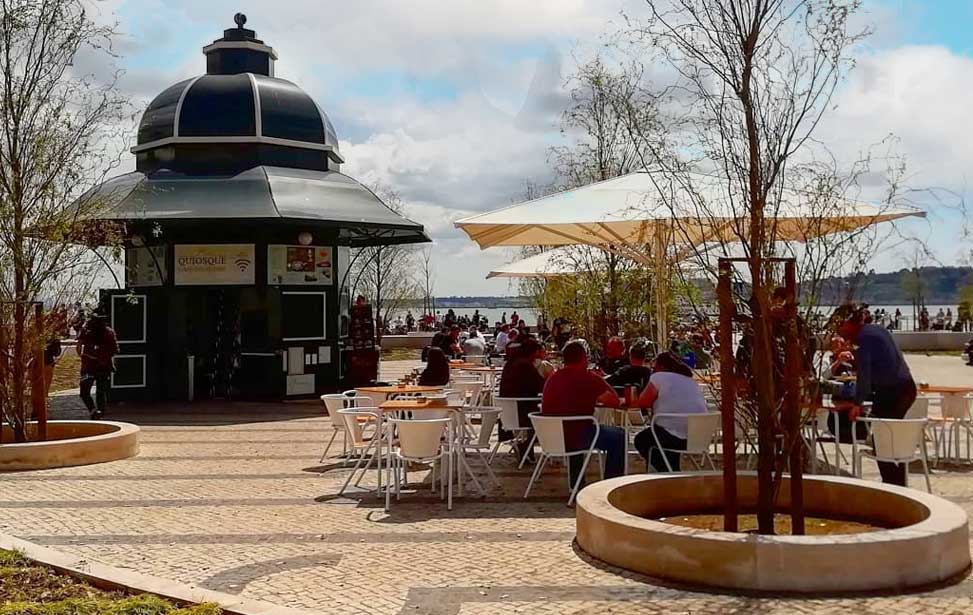 The area around Cais de Sodré is a transport hub where a train station servicing the Cascais Line, half a dozen bus stops, a ferry port and the jetty for hop-on hop-off boat tours. In the centre of the area, the Jardim de Roque Gameiro is a landscaped square open on one end to the river that provides impressive views and a refreshing breeze. The kiosk attracts tourists and commuters alike. There's a wide selection of snacks and meals on the menu for considering this kiosk as a lunch destination. In addition to the usual selection of pizzas, pies, sandwiches and croissants, there are healthier options such as açaí bowls or yoghurt with granola. 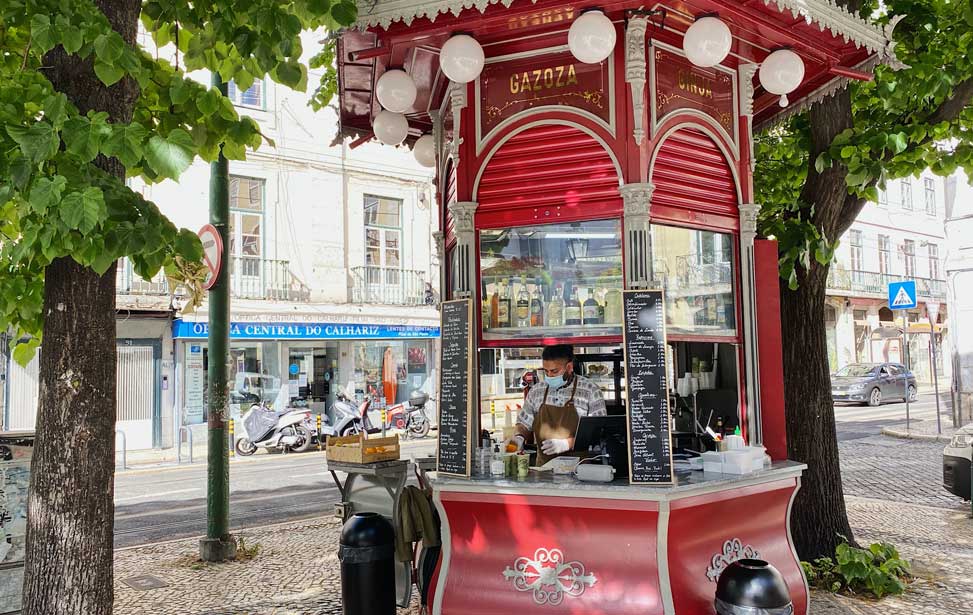 This small forgotten-looking square is home to the Igreja de São Paulo church. It was rebuilt in the 18th century following the 1755 earthquake and is renowned for its 3D effect painted ceilings. The kiosk in the square is one of Lisbon's original art nouveau constructions. It was restored in 2013 and reopened. It is a great place to sample Lisbon’s traditional gastronomy, rarely found in restaurants or cafés. These include pork sandwiches, fried squid sandwiches, tuna sandwiches, octopus salad, spicy lupini beans, and coffee with ginjinha, capilé and the red currant drink groselha. 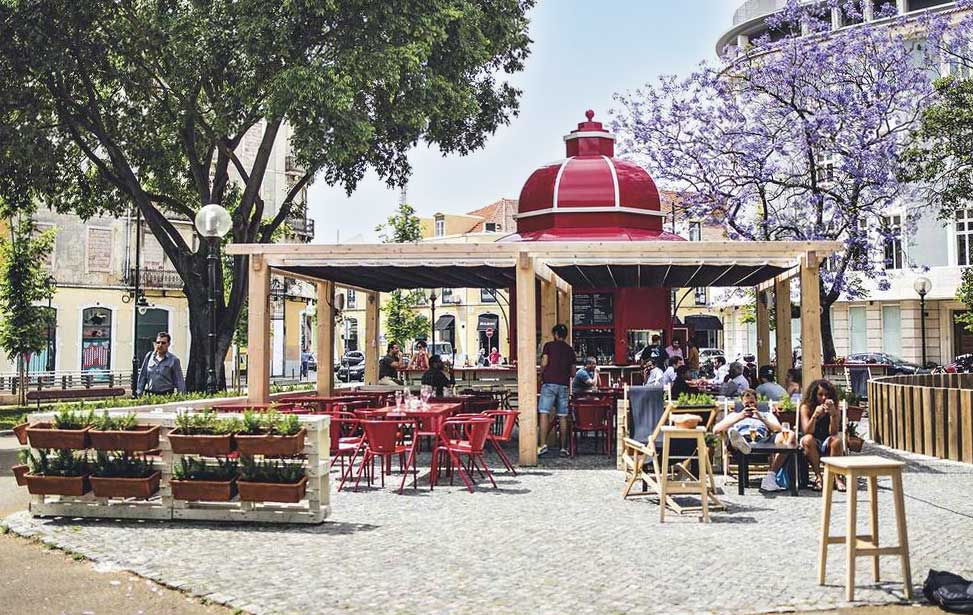 The Jardim Dom Luis is a green area outside the Time Out Market close to the Cais de Sodré train station. In the centre, is the statue of the Marquis Sa da Bandeira and to one side is a bright red kiosk. When the tables and chairs around a kiosk are full of people on a sunny day, that is a good sign. When they are still full on an overcast or rainy day… then you can be sure the place is a real success story. That is the case at the red kiosk on Praça Dom Luís – which now has the name Quiosque do Cais – making it a leading candidate for the city’s best. This kiosk popular with families, kids take full advantage of the adjoining playground. 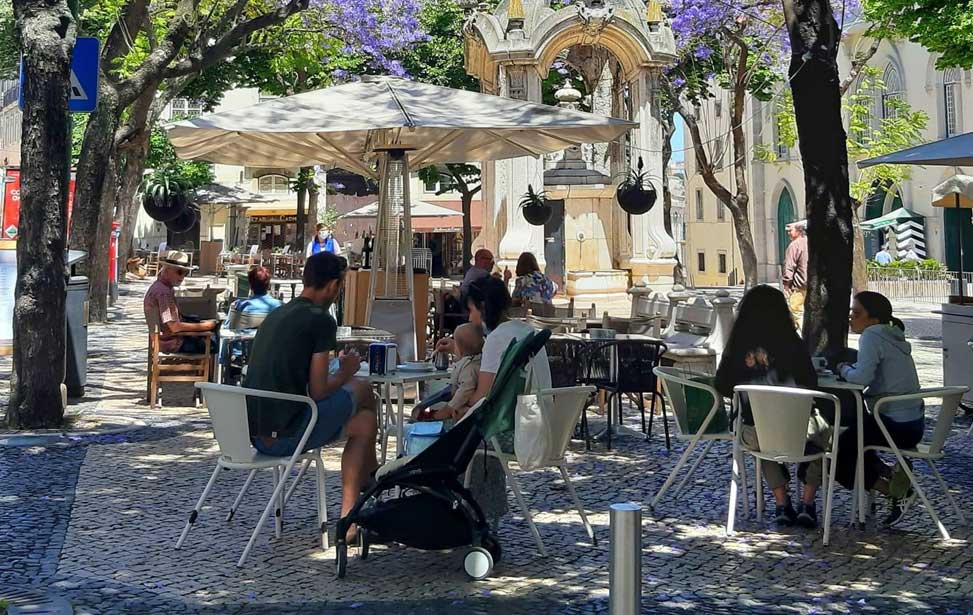 This small square has tranquillity that betrays its turbulent past. Its Pombaline buildings and the 18th-century fountain were built to replace the devastated buildings which crumbled during the 1755 earthquake. Left unrestored as a monument to the tragedy, the ruins of the Carmo Convent is located on the north side. In the heart of the square is the delightful fountain of (Chafariz do) Carmo. It was erected here in 1796. The Jacarandas trees occupying the perimeter come from South America. During May and June, they bathe the square in beautiful purple blossoms.

Quiosque do Carmo
There is an extensive café and bar menu. The star of the menu is the nicely cooked seafood risotto, octopus and cod. The desserts are great to share, such as the parfait, pudding and gâteau. The Quiosque do Carmo is also a great location to start an evening with a delicious sangria, port beer or wine.