The Chiado has been inhabited since Roman times. During the middle ages, after the reconquest of Lisbon, the small villages that dotted the area coalesce to create the Chiado district. In August 1988, the Chidao was severely affected by a fire when 18 buildings were partially or totally destroyed. Many old shops in Rua do Crucifixo were destroyed. Like the legendary phoenix, the Chidao soon arose from the ashes. The restorations that occurred consciously restored the area to its former glory.

Chiado endures as one of the city's most affluent quarters. It has a plethora of fashionable shops and old café/tearooms in the Rua Garrett. It's here where you'll find the famed A Brasileira café, a draw for students, artists, poets and other bohemians. It is here too where you'll find many art galleries, theatres, pottery workshops as well as bookshops. 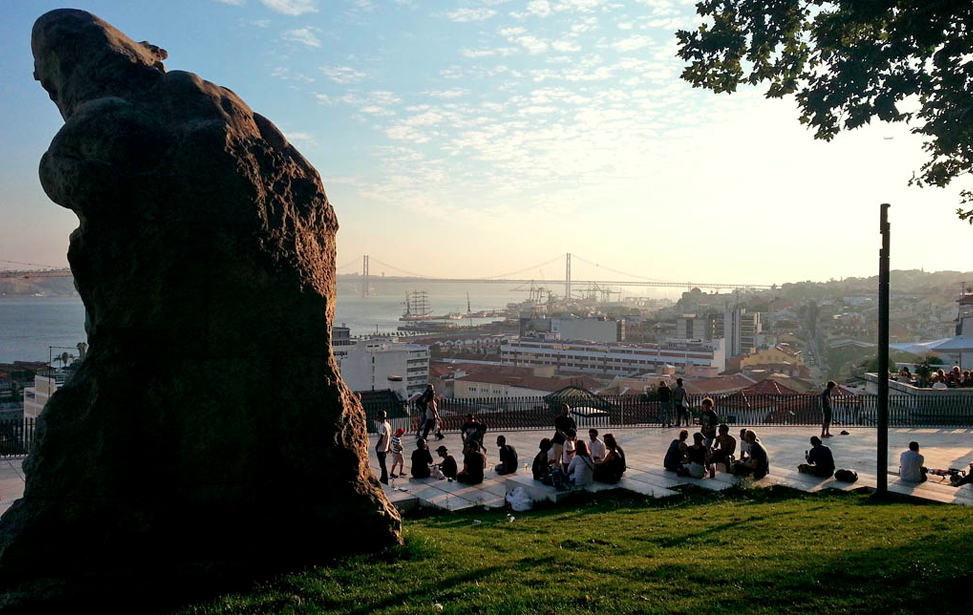 The cosmopolitan heart of Lisbon where everyone wants to be and be seen. 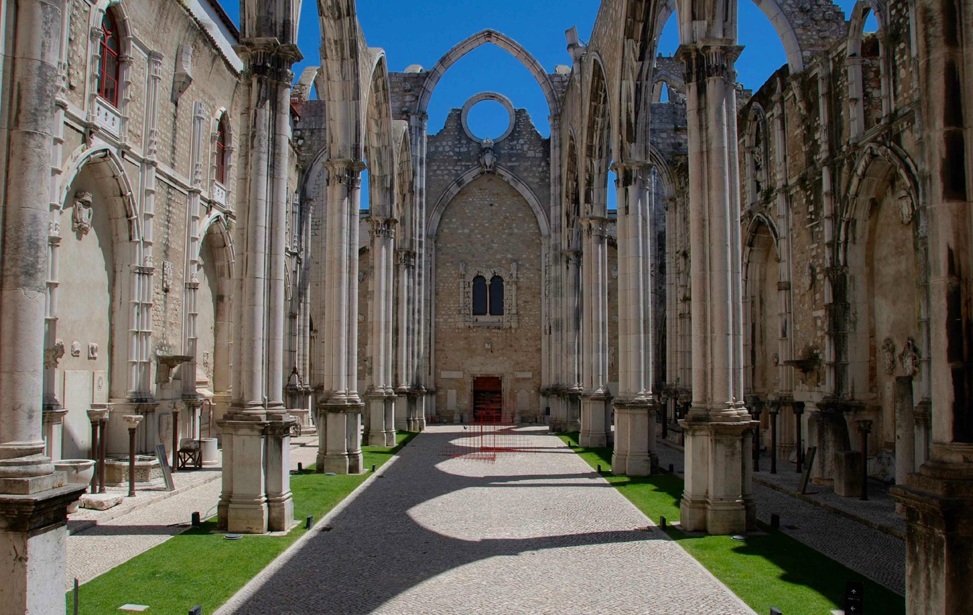 The impressive Gothic ruins of the Carmo Convent which overlooks the Baixa. 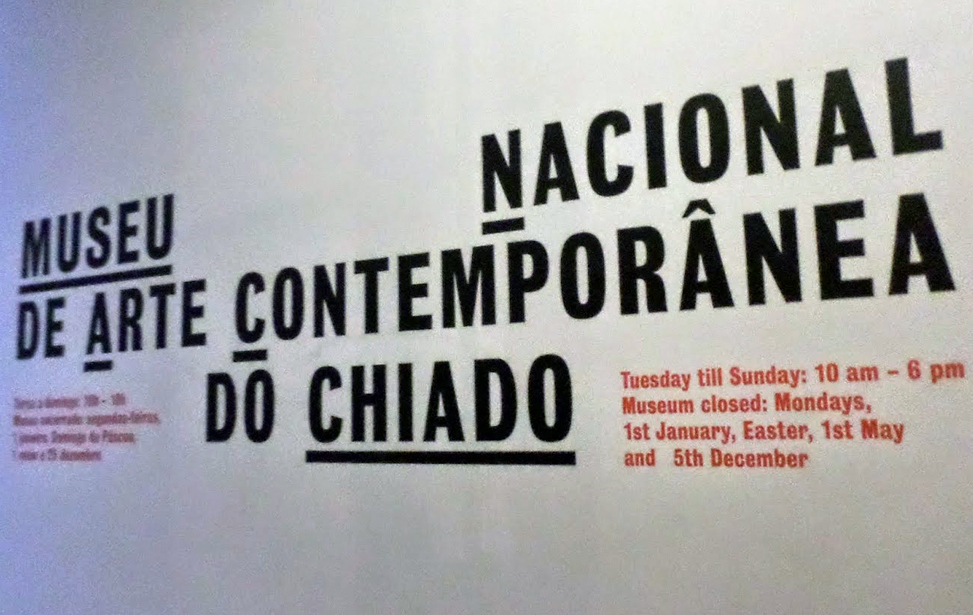 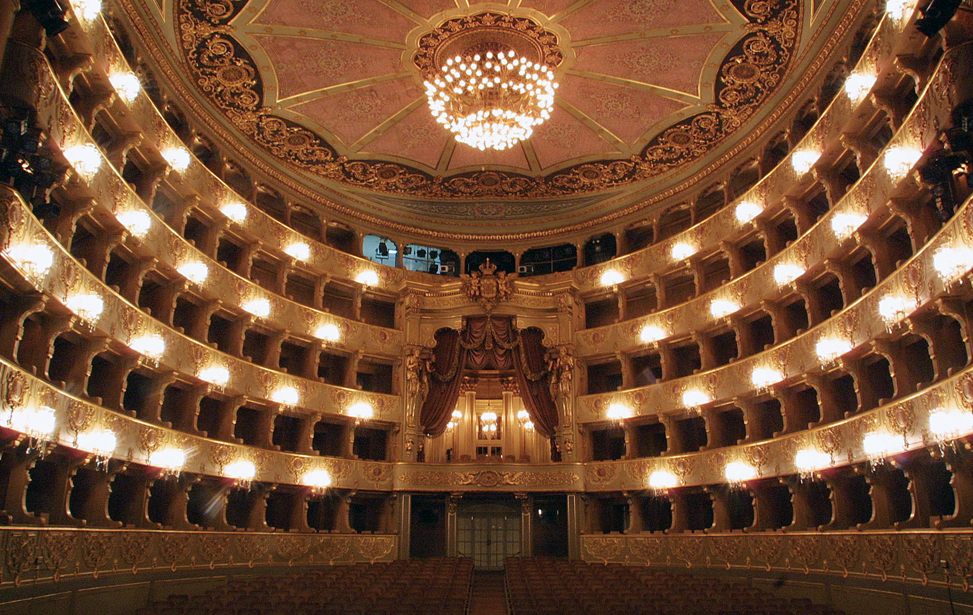 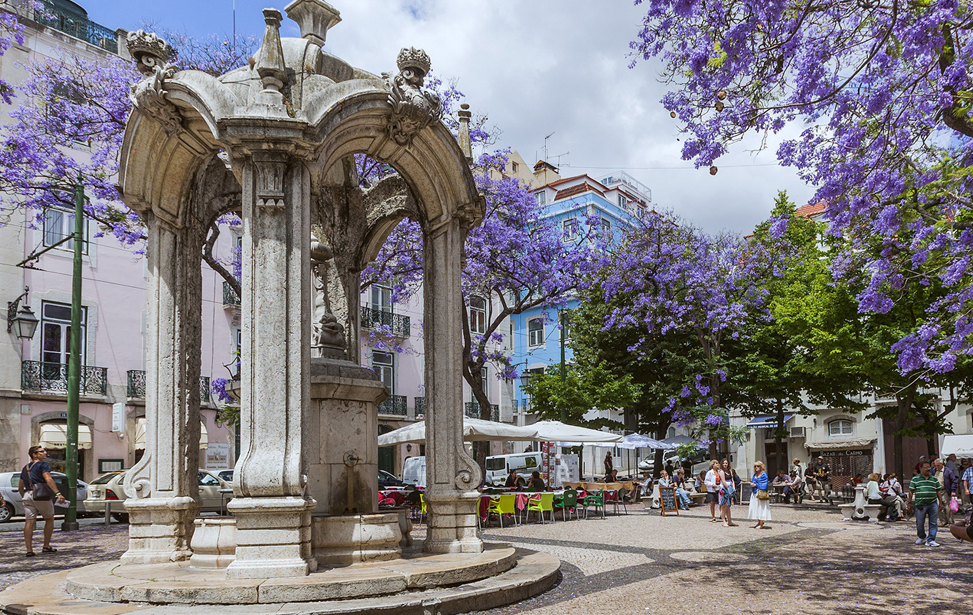 Chafariz do Carmo - a baroque fountain

This small square has tranquillity which betrays its turbulent past. Its Pombaline buildings and the 18th-century fountain were built to replace the devastated buildings which crumbled during the 1755 earthquake. Left unrestored as a monument to the tragedy, the ruins of the Carmo Convent is located on the north side. In the heart of the square is the delightful fountain of (Chafariz do) Carmo. It was erected here in 1796. The Jacarandas trees occupying the perimeter come from South America. During May and June, they bathe the square in beautiful purple blossoms.

Quiosque do Carmo
The kiosk in the square has an extensive café and bar menu. The star of the menu is the nicely cooked seafood risotto, octopus and cod. The desserts are great to share, such as the parfait, pudding and gâteau. The Quiosque do Carmo is also a great location to start an evening with a delicious sangria, glass of port, beer or wine.

The museum is easy to spot in the Largo do Carmo. Guards in ceremonial uniform stand sentinel in from of guard boxes at the entrance. After the 1755 earthquake, a part of the ruined Carmo Convent and Church was converted into a military base. Today it is the headquarters of the National Republican Guard, the military-run police force that polices the rural areas of Portugal. The museum traces the history of the organisation from its beginnings in 1911 to the present day and includes some interesting artefacts and exhibits. Items such as motorcycles, uniforms and weapons and other memorabilia. The museum opened in 2014 to commemorate the 40th anniversary of the 'Carnation Revolution', when, on 25th April 1974, the right-wing dictatorship was overthrown. A poignant icon of this somewhat bloodless coup is revolting army troops in the streets of Lisbon with flowers in their gun barrels, one of which is on display here. The headquarters of the Republican National Guard played a pivotal role in the definitive moment of the Revolution and on the 25th of April the last prime minister of the dictatorship regime was held up here before finally succumbing to the wishes of the crowd of thousands outside in this beautiful square. Monday - Saturday 10h00 - 18h00, Sunday: CLOSED | €2.00

Getting to the Republican National Guard Museum 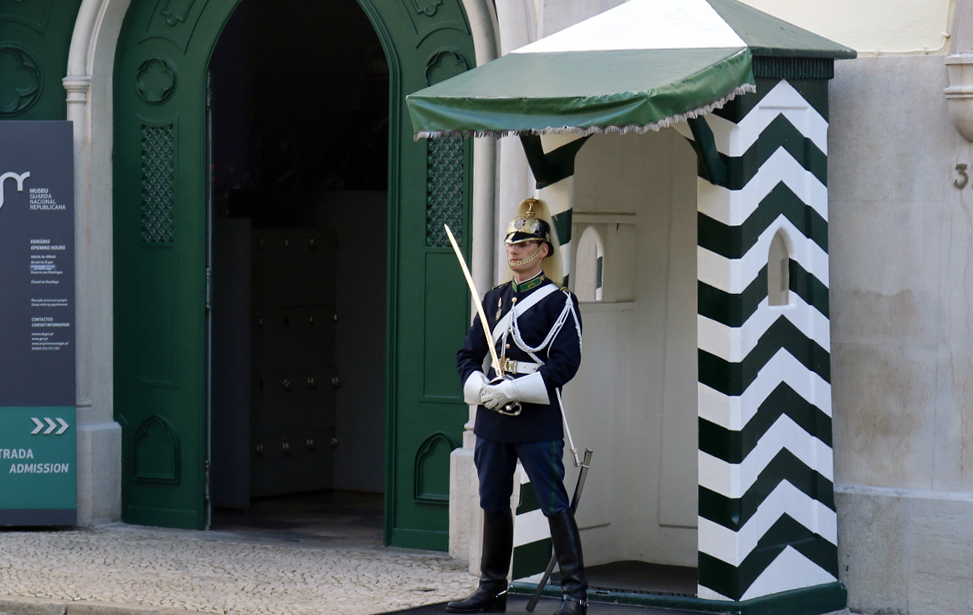 A sentry outside the Republican Guard Museum 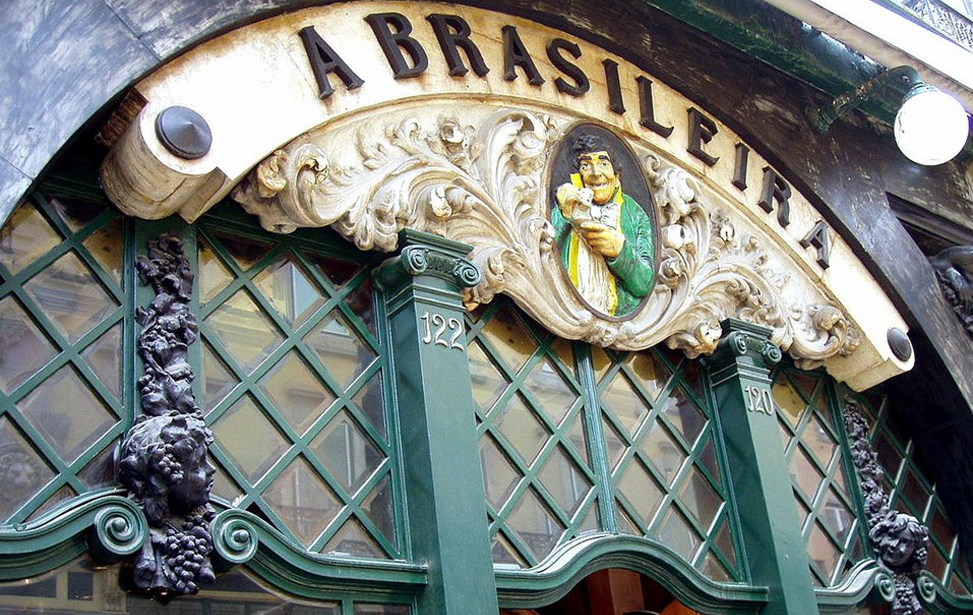 The beating heart of the Chiado is the Rua Garrett, the main street where you will find some of the city's most iconic shops, most prestigious brands and cafés. At one end is the Armazéns do Chiado shopping centre and the Largo do Chiado square at the other. Along the way, you will encounter the Bertrand bookshop that first opened its doors in 1732 and thus considered the oldest in the world. Housed inside the beautiful Art Nouveaux façade is the beautiful Tous - Ourivesaria Aliança jewellery shop whose French Baroque interior is reminiscent of the Palace of Versailles. It is also on Rua Garrett you will also find the iconic A Brasileira coffee shop. It is here the "Bica" - Portugal's short expresso type of coffee was first served. Once a draw for Portugal's intellectuals, writers and poets, the café now is a popular tourist attraction, a place worth visiting if you don't mind the inflated prices.

The street's Igreja dos Mártires (Church of the Martyrs) stands on the site of the former Crusader camp used during the Siege of Lisbon. It was constructed on top of a burial ground created for the English contingent of the besieging army. Music recitals are often held in the church.

A curiosity shop that contains typical Portuguese products from yesteryear. For the locals, A Vida Portuguesa offers an experience of nostalgia and for the visitor an opportunity to marvel at the retro packaging and discover a souvenir a little different from the norm. The range of products on sale is vast ranging from Bordallo Pinheiro tableware to Couto toothpaste, Viarco Pencils, Coração metal cleaner, Ach Brito soaps, regional sweets and delicacies, schoolbooks, Sancho and Lona shoes, among many other brands which fly the flag for Portuguese quality manufacture. Originally A Vida Portuguesa was the brainchild of Catarina Portas, whose aim was to champion Portuguese manufacture and has become so popular there are now two shops in the Chiado: one at 11 Rua Anchieta and a larger space at 2 Rua Ivens. For a more in-depth insight please visit their  Website. 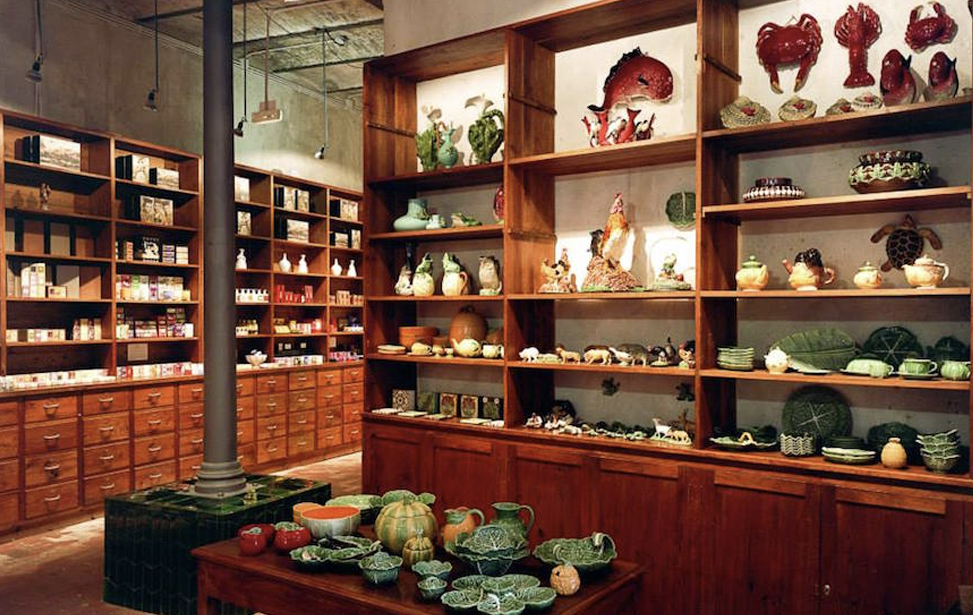 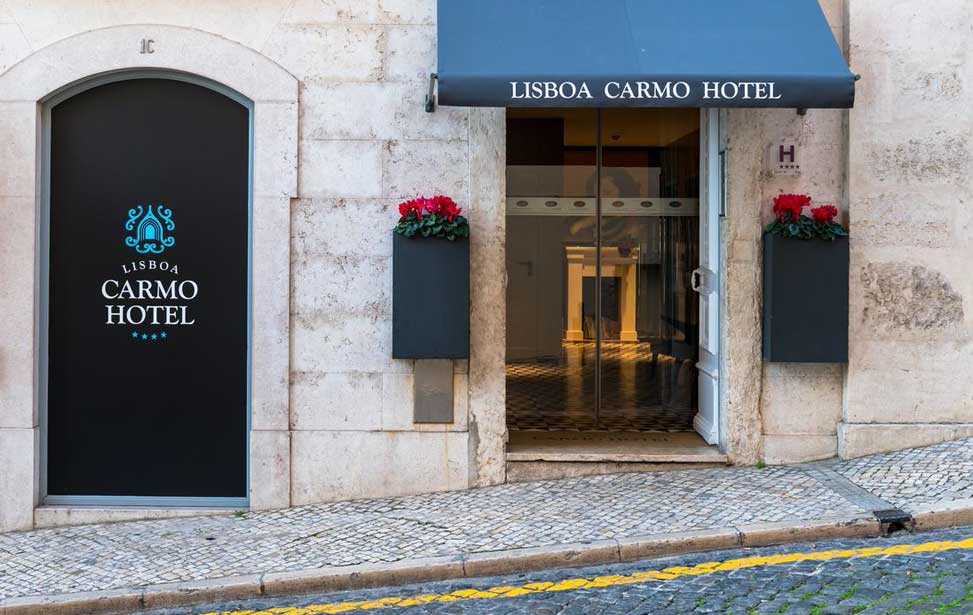 Located in the heart of the city Lisboa Carmo Hotel features luxury rooms with classic and contemporary décor. The upper floors of the hotel offer views of the Tagus River and Lisbon's old town. The popular Bairro Alto district is three minutes away. The stylish rooms have pastel-coloured walls. Each is equipped with air conditioning, a flat-screen cable TV, a minibar and a private bathroom with toiletries. Some rooms have Saint Jorge Castle, city and Tagus River views. In-room breakfast is available. A buffet breakfast is served daily. Guest can enjoy contemporary-style dining at the Maria do Carmo Restaurant. The bar serves a variety of beverages and wines. Lisboa Carmo Hotel is a five minutes walk from several restaurants, bars, cafés and shops. Historical sites and museums such as Lisbon Cathedral, Igreja de São Roque and the Chiado Museum are within a ten-minute walk away. 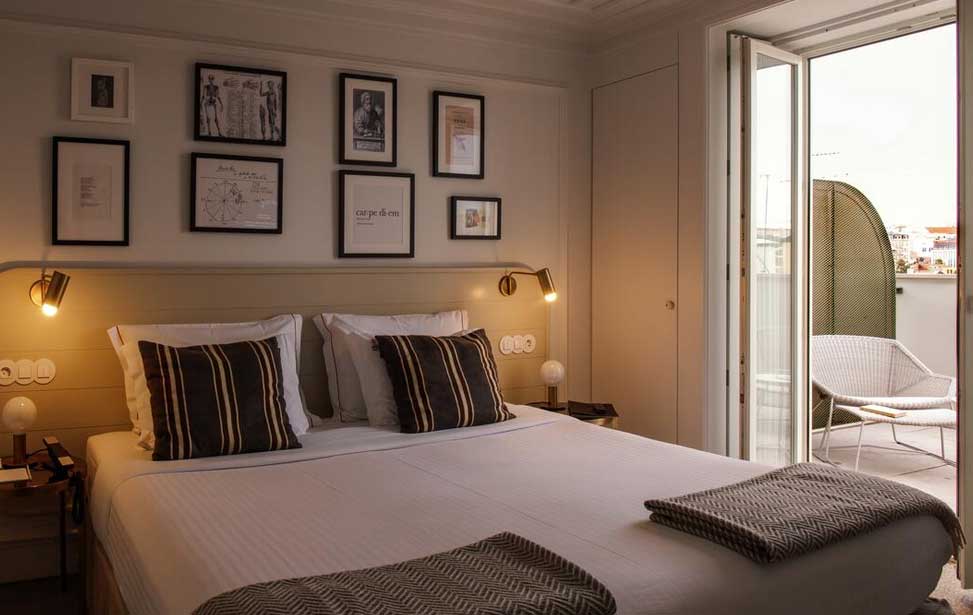 Inspired by the life and work of Fernando Pessoa, Lisboa Pessoa Hotel is located in the centre of Lisbon, 200 yards from Chiado. The hotel features a restaurant with panoramic views, a SPA and fitness centre, meeting facilities and a library. Free WiFi and paid private parking are available. Lisboa Pessoa Hotel offers a variety of rooms, including interconnecting rooms, rooms with a terrace and stunning views of Lisbon. All rooms have air conditioning, a safe and a flat-screen TV with cable channels. Each bathroom includes toiletries and a walk-in shower. The reception is available 24 hours. The hotel has free Wi-Fi. Restaurante Mensagem provides an intimate atmosphere with eight niches with a private window and two terraces with views of the Portuguese capital. The products are carefully selected by Chef Manuel Ferreira and the dishes are inspired by Portuguese tradition. 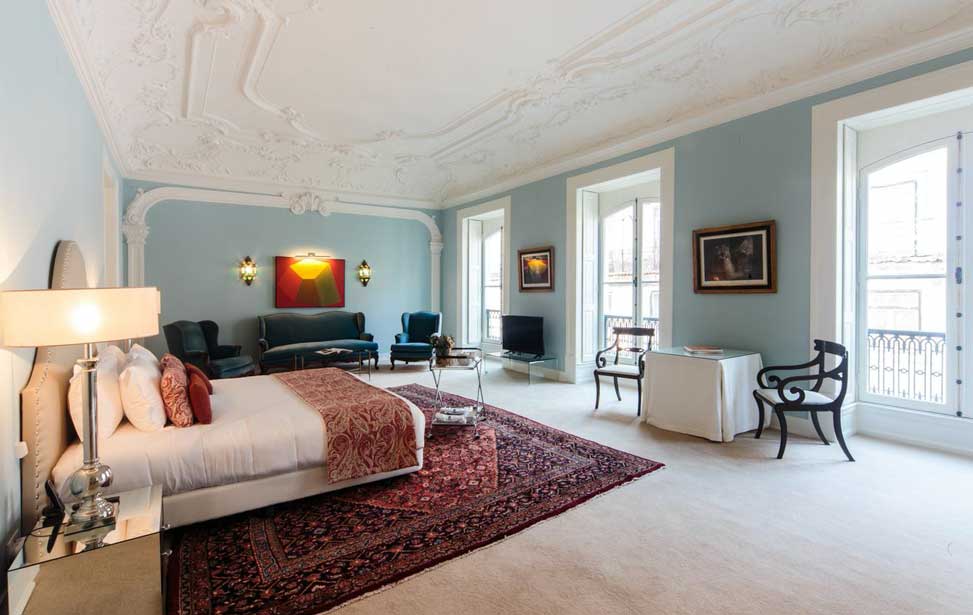 Featuring free WiFi throughout the property, Dear Lisbon - Palace is situated in Lisbon, 200 yards from Chiado. It is is located in a historic, protected and renovated building from the 19th century, which has a reception on the ground floor with all nine suites on the first floor. All of the elegantly-decorated suites include a flat-screen cable TV, as well as a mini bar and a safety deposit box. Some units have a seating area where you can relax. Guests can enjoy views over Lisbon or over São Jorge Castle. All suites are equipped with a Nespresso coffee machine (with some complimentary capsules) and an electric kettle. The private bathroom includes bathrobes and slippers. 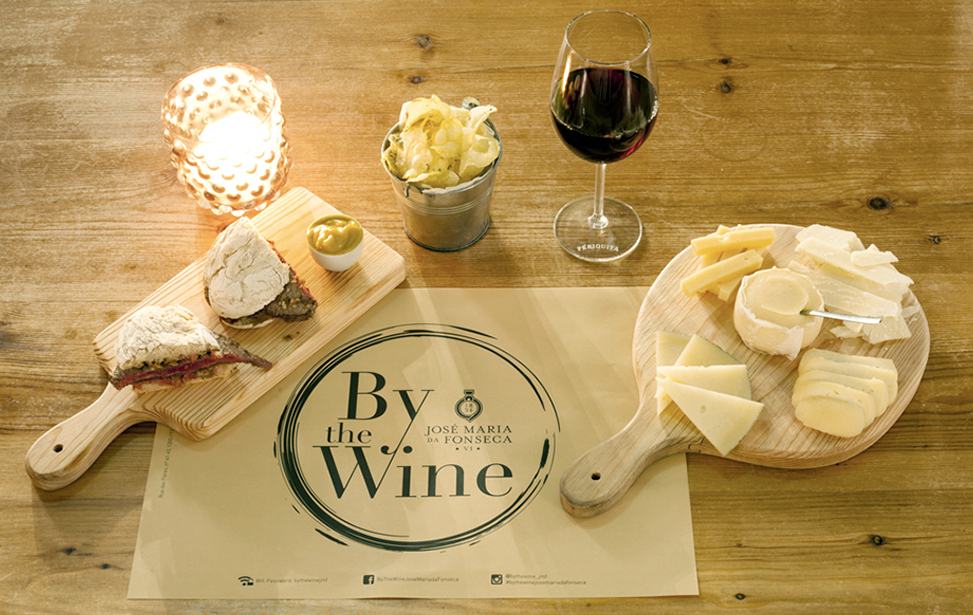 Portugal's oldest wine label has this cosy and distinguished establishment to not only highlight their great wines but also to accompany them with amazing regional and national dishes. Among the different gastronomical options, you can find the bread from the Algarve, ham of Bellota and cold meats from Guijuelo (Salamanva area), various cheeses (notably the famous Azeitão cheese), oysters from the Sado estuary, mussels salad, salmon ceviche, carpaccio and different desserts accompanied by the Moscatel de Setúbal wines. This flagship stores is used for wine tastings and new product launches and offers a relaxed environment for food and wine lovers, in the heart of Lisbon. 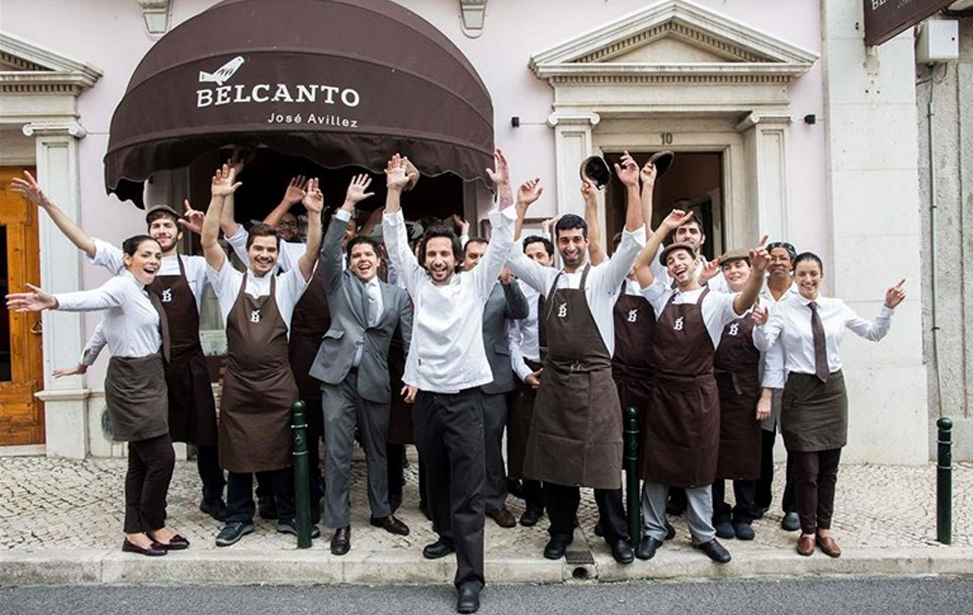 The restaurant first opened in 1958 however since distinguished Portuguese chef José Avillez's Belcanto took over the reins in 2012 it has gained two Michelin stars. In fact, in 2015 it was added to the world's 100 best restaurants. Although Belcanto has several other restaurants around Lisbon and Porto it is here where he presents his haute cuisine, reinventing Portuguese and international flavours and adds a playful twist to traditional fare. His youthful and playful nature produces such gems on the menu as a seafood starter called 'wave breaking' and a sea bass plate named 'dip in the sea'. There's a seven-course 'Lisbon' tasting menu that is expensive which comes in at €165.00, boy oh boy is it worth it. The relaxed atmosphere and fine decor add to the draw of this restaurant and bookings should be weeks if not months in advance. 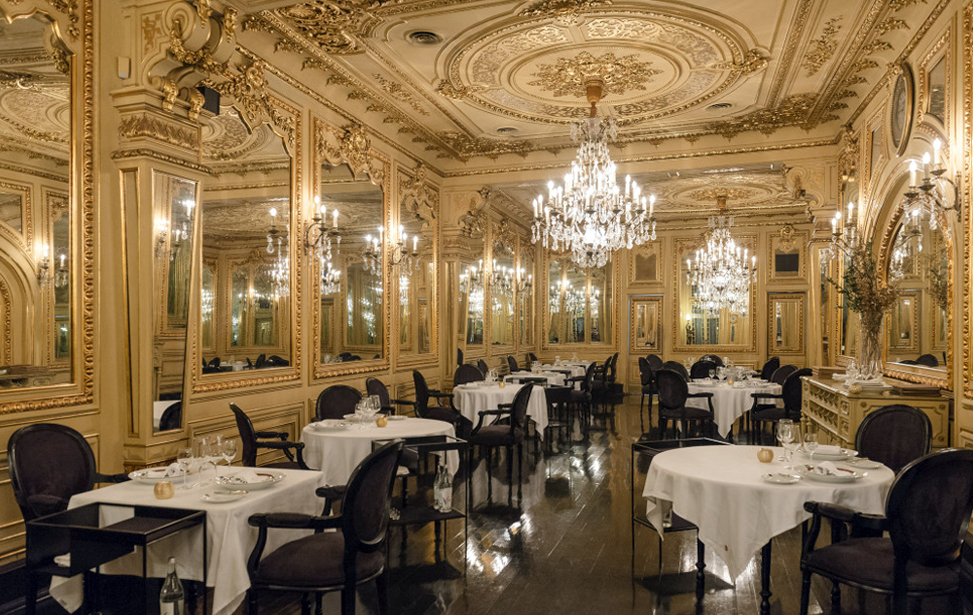 The Tavares restaurant is one of the oldest restaurants in Europe and Portugal's oldest. It first opened its doors in 1784 and still retains the name of the Tavares brothers, who took over the business in 1823. Over the centuries it has gained and retained an excellent reputation. It is THE place for foodies and gastronomic critics from all around the world. In 1861, the businessman Vicente Caldeira endured to make the restaurant "the most luxurious place in Lisbon' and his efforts are self-evident. Its opulent guilted baroque and rococo interior is breathtaking. The chefs may have changed over the years, but the Tavares restaurant remains one of the best, most exquisite and historic restaurants in Lisbon.